This is one of those mixed routes that seemed relatively obscure until fall 2018 and then became one of the social media IT routes of the Rockies for a period. Like all mixed routes, the amount of ice will dictate how it climbs but when the second pitch is mostly ice this is a high quality and relatively low commitment climb.

P1 - Climb some easy ice into a chimney with a chockstone. Exit left via some fun but awkward 5.9ish moves to a snow ledge. Pull a bulge and walk up a low angle snow slope to the ice off left of the base of P2. You will pass a nut and piton anchor on a cliff off right in the middle of snow slope which is the second rap anchor on the descent. Build an anchor at the base of P2 with screws or a thread around the ice. M5, 55M+

P2 - Climb a vertical vein of ice with good stems off rock using a mix of rock and ice pro. In fall 2018, this was basically a WI5+ pitch with occasional rock pro. The FAs rated this pitch M6. P2 ends in alcove at the top of the ice vein. In 2018, the anchor was a nut with a thread backup but could use some better hardware. 40M, WI5+, up to M6

P3?? After the ice ends at the top of P2, it appears some harder dry tooling could lead up one more pitch to the top of the cliff that contains the route.

Dark Nature is located in a high chasm above the slope across Lake Louise from Louise Falls. From the Chateau, follow the tourist/sled trail down the right (north) side of the Lake past Louise Falls to basically the end of the Lake and walk across the ice and many creeks that feed the Lake to the other shore and slog up the approach slopes which will involve some bush wacking. An alternative is to walk down the center of the lake. The approach slope is definitely exposed to avalanche hazard but the route itself seems more sheltered. 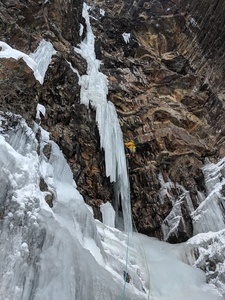 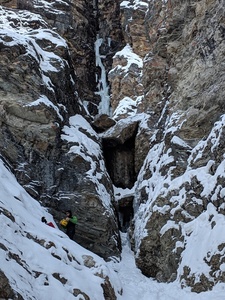 Gearing up for P1 with climber on P2 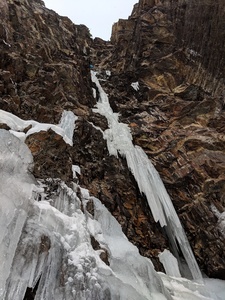 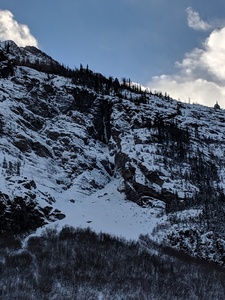