Climb the right-facing dihedral up several rock steps until it kicks back (M2). Traverse right 6 feet to a small tree, and climb up and above the tree and into a short chimney. After pulling the lip of the chimney (the crux), the climb follows an easy gully (M1?), but it's loose, and there isn't much gear, so consider placing something before exiting the chimney. Climb the gully to a cluster of trees from where you can rappel.

Although the chimney has some interesting moves, overall this is a lousy route that is full of debris. It may get cleaned up over time if it gets climbed more, but that seems unlikely. I am posting it here so that people know to avoid it, and don't confuse it for "Unknown?" like we did.

For what it's worth, the route seems to be better when it's covered with lots of snow and is very cold than in drier and warmer parts of the winter. It is better than the "bomb" rating I've given it but by no more than one or two notches.

It is the leftmost, right-facing dihedral on Alberta Falls Wall and is left of "Unknown?". There's a large log at the base.

Rock gear. A spectre or pins may have some use protecting the route above the chimney. It can be rappelled with a single rope if the tree halfway up is used as an intermediate rappel. 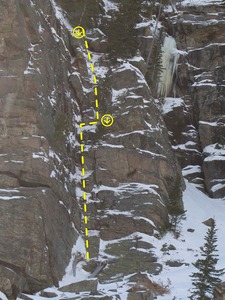