Crown Royal starts to the right of Highland Malt and to the left of Southern Comfort and climbs easier than the former and harder than the latter. It climbs somewhere in the 5.8- grade now but will likely clean up to 5.7 after a few laps and some rain. I think the route's creator will be OK with 5.7 or 5.7+ (and I'll adjust the rating at a later time should the consensus change).

The routes starts with a few moves on slabby rock to the first 2 bolts. After that you will see an obvious bulge that features a prominent flake on the left and a nice chicken head on the right. Move through the bulge delicately being mindful to limit outward force on the flake. Above this bulge and bolt 3 there is "small run out" (quotes for emphasis and mainly intended for the new lead climber) but the footing is solid albeit slabby as you move into place to clip bolt 4. There is also some some seemingly thin climbing for the grade as you approach bolt 6 but keep moving, the footholds are there and solid and there are some good solid crystals to grab as you move up to the last bolt, with similar rock as you move to the next bolt over on Highland Malt.

In an effort to not crowd the adjacent routes, the route ends at bolt 6 but the climbing does not: when you clip #6 you have a choice to either join the Highland Malt route on the left or join Southern Comfort to the right. If you decide to go left look for the next bolt up and left and follow Highland Malt to its anchor chains. If you decide to go right, look for the nearby bolt up and right and follow Southern Comfort up to its own set of chains.

The new route might be a good second or third lead after Southern Comfort or East Country.

With this new route now set you can now start on Southern Comfort and climb the routes to the leftward direction and the grades progress nicely higher 5.5, 5.7, 5.8, etc..

6 bolts. This route shares bolts/merges near the top with Highland Malt and/or Southern Comfort so you will share the 2-bolt anchor with rap rings on the route you merge with. 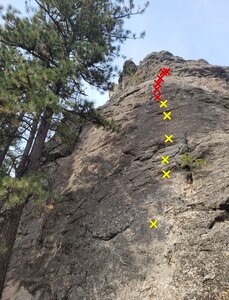 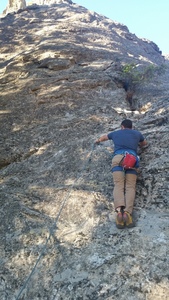 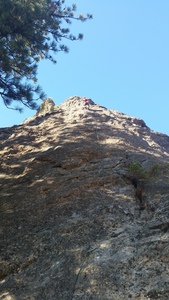 First ascent by Eric Barrett topping out on Cro…