We went in from the Humphreys basin after camping somewhat close to the base of the black chute that's described in the Eastern Sierra peaks passes and trails book (photo below). There's an obnoxiously lose talus field at the bottom between Humphreys lake and the start of the route. From a distance the black chute looks somewhat intimating but it was around 3rd/4th class for about 1,000 feet that lead up to a dirty funnel. Remember this spot as it's an easier descent compared to the north coulior that the Hutchinson route follows. From the top of the funnel the Buttress has many apparent routes (many of which probably haven't been climbed). The book describes a 4 pitch 5.4 route that wraps around the east side of the Buttress however due to the wind we looked for protection by climbing into the left/west Pinnacle of the buttress. The climb was pretty straight forward but felt harder than 5.4, we did 3 pitches, but it could be done in more or less depending on your rope and route. We kept pitches somewhat short to maintain communications over the hard wind. Following up the center line starts with some run-out easy slab moves and transitions into vertical crack climbing with good pro passing an old fixed hex before pulling over a good roof. We could have dropped off to the right but the rock was better to the left so we continued until we could find a good anchor and traversed right into another dirty chute that brought us to the east side of the ridge where the climb meets up with the East Arete. From there follow the ridge North to the final technical pitch of 5.4 to the summit block.

Descent: There are anchors at the top for a rap and a second rap anchor about 40-50 feet down off the SE side of the summit block. We descended down the Hutchinson route using a few old rappel anchors that could use some new webbing (we added some 5m cord and a carabineer to one, I'd recommend bringing some leavers and cord) and downclimbed past other to avoid using the rope until we got down to the two chutes that lead to the black chute that we started on. Both chutes will get you down but it would be easier to traverse back to the bottom of the Buttress and go down from there. Descend the way you came up from there. 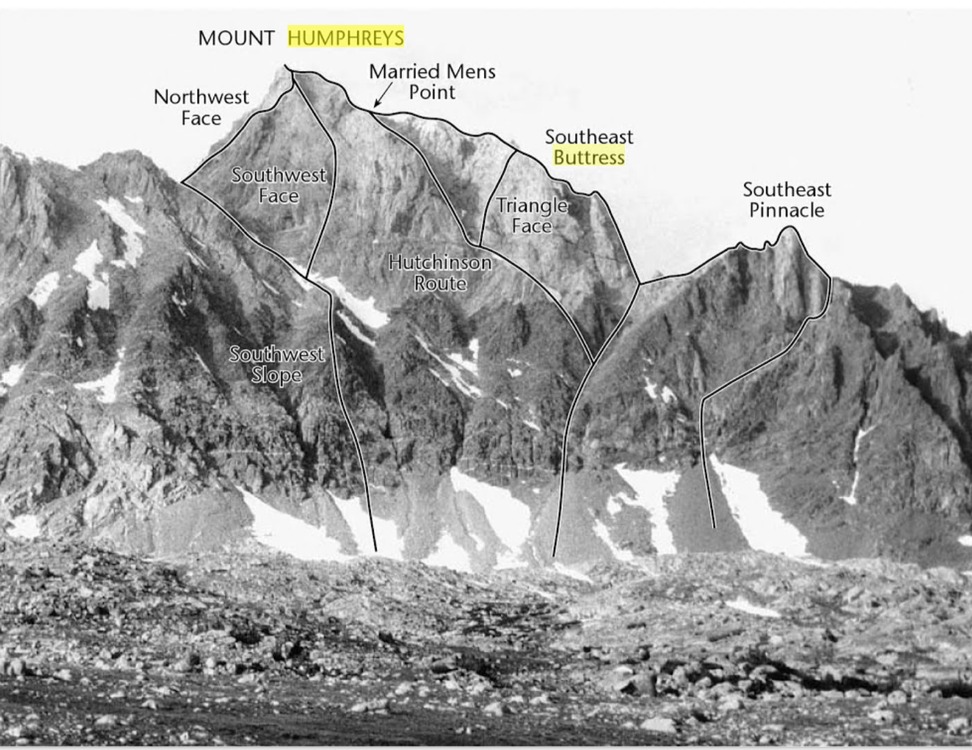 Most obvious access is from the Humphreys basin which is a 5 mile hike out of North lake (120 East from bishop, right turn to North lake a few miles past Aspendell) up Paitue pass trail. Once over the pass, immediately head north east towards the upper lakes until you reach Humphrey lakes another few miles East. From here the climb is straight ahead

Light/single rack with extra slings, cord, and rap hardware. A few doubles are nice to have. 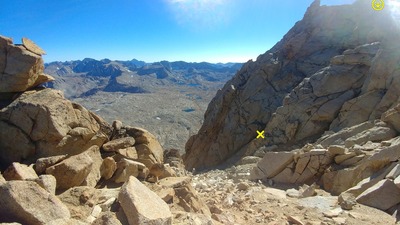 Somewhere around married man's point, with the… 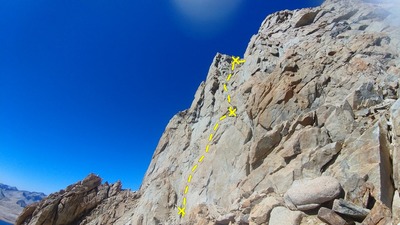 You can see the left Pinnacle we went up and th… 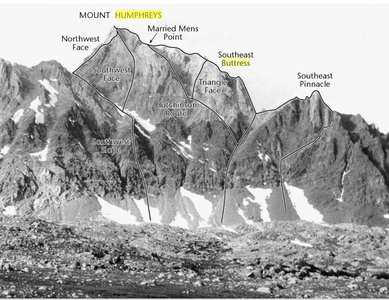 Ancient beta from the Peaks Passes and Trails book 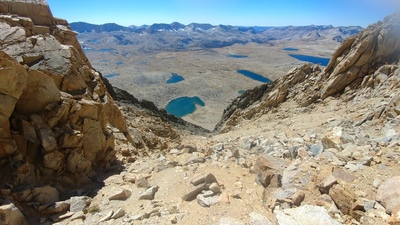 Top of the dirty funnel and black chute