This is a great line up an incredible wall. It was also one of Harding's final routes in Yosemite. The route follows a series of cracks, bolts, and a tree to a steep smooth headwall. The Direct is like "a double West Face of the Leaning Tower" in that it offers a 2-3 day outing on a wall that is otherwise climbed over 5-10 days. The Direct finishes on the Porcelain Wall (aka the Harding Route), which climbs several pitches of steep bolt ladders up a blank face, originally climbed in 1976 by a team led by Warren Harding. The cruxes are a few loose pin/beak/hook placements, and the full day approach. The climbing is technically comparable to Zodiac - less sustained but with a few more intricate placements (aid boulder problems).

The upper half of the route was first done by Harding in 1976. Harding chopped the route as he went (removing nearly every bolt). It was one of his last acts before leaving the Valley forever. The route was resurrected in 2012. The resurrected line follows mostly natural features half way up the wall, then finishes out Harding's line. The route is similar in nature to many of Harding's other classics - a very direct line that makes use of bolt ladders (this one a bit more as in the style of his later routes like Dawn Wall).

Be aware of loose rock on the lower pitches on this line - do not climb below another team (it gets so little traffic, not likely an issue).

* P1 climbs a very loose 5.6 chimney. There is an alternate A2 start. Be careful!
* P2 loose 5.5 to a bolt ladder.
* P3 The fun beings. Short bolt ladder to A3 beaks to a long bolt ladder. The seam might go free at some 5.11ish grade.
* P4 climbs Papa Pine. The rope sling technique I used did a hell of a number on the tree's bark. That's not a good thing. Also, we cut loose some super tight slings around the tree that were going to kill it. Climbers should stay off this tree, esp if this route gets any traffic. I'd highly recommend the next team just fix 40-60' of rope on Papa Pine and keep climbers off the tree entirely. Or put in a bolt ladder. Or route a new pitch around either side (left might be easier). Papa Pine should be preserved for future generations to marvel at.
* P5 5.9 fun.
* P6 C2 corner. I placed one arrow at the very top, only to realize there was an alien placement hidden a few inches above. The rest went clean. Bivy for 1 here. Up and left supposedly was another bivy. My partner was so tired, he just curled up and slept at the P6 belay.
* P7: Watch out for loose rock here. The lower 5.7 section is not a joke - pay attention to loose blocks. I nearly pulled a block loose when starting up the A3 section. The A3 is good fun. There is a bivy spot for 2 at the end of the free, before the aid. No fixed anchor though, and maybe no substantial anchor.
* P8: Welcome to the Original Harding route. This was a mix of bolts, cams, beaks, hooks. The end goes free at 5.9. Beware the final fixed beak has a sling stuck behind it, but not actually through it.
* P9: Beaks to a bolt ladder. Ends at Midway Ledge. Supposedly there's a bivy to the far side (not obvious from the belay).
* P10: This is an awesome pitch. Bolts to beaks to bolts to beaks to bolts. Original harding bolts and holes mixed in for fun. Have a bolt kit along - if you rip one of the harding bolts you might need to drill.
* P11&12: Long bolt ladder to Paradise Ledge. Nothing but bolts. Watch out for loose rock going onto the ledge. My partner pulled a huge block loose. It would have killed anything in it's path. Also, be careful about how the rope runs from the anchor across to the bolt ladder. It might be worth putting in a two bolt anchor at the top of the ladder (talk to the FA team first). Note about Paradise Ledge - the bivy is waaaay over to the right (two old bolts). We didn't find this until 7AM the next morning. I slept on the sloping ramp. Not so fun.
* P13: Beaks to C2. However, the C2 has a bolt mid way. It looks odd - why place a bolt there? Answer: it pulls the rope out from a sharp as hell edge. I used a draw at first, lowered down to replace it with a locker. Keep your rope away from that edge. The last bit goes clean with micros and cam hooks.
* P14: Hooks and a beak off the belay (we had linked 13, so no big deal). Then the most stretcher bolt ladder in the world. The bolts at Planet Granite are spaced closer together. If you have something to pad the line at the end belay, that would help. Or clove hitch off the last bolt to keep from running tight over the edge.

Overall,  this is a great nailing route without all that much nailing. Felt overall comparable to Zodiac (once you factor in the approach). The pitches were not as sustained, but the intricate aid placements were harder. The bolt ladders kept things moving along. This would be a great middle ground between a Washington Column line and an El Cap nailing line.

Final note: Richie Copeland is something like 6'4". The bolts are spaced insanely far apart. Plan on aider-gymnastics. If you are under 5'10" bring a short cheater stick. Otherwise you may not be able to get between placements.

See Porcelain Wall page for info on approach. The crux of the route is the approach. The start is the obvious chimney. Plan on shuttling multiple loads of gear, water up the canyon. The loose talus is brutal, especially if you are carrying too much in a single load.

The Porcelain Wall canyon is an amazing spot - you'll have it to yourself (and a bear or two). There is bear poop up there - don't leave bags unattended and hang your food high off the ground at night. We hung the food bag by attaching a fixed line to P1 to a boulder, pulling the bag 25' out from the wall.

Cams: 2 ea 0.3 (smallest) - #4, 1 #5
Offset cams: single set.
Nuts: single set
Micros: single set, single set of offsets
Rivet hangers: 2 thin, 2 thick
11 beaks (super critical): 1 #1, 5 #2, 5 #3 (if you overdrive and fix, you'll start running out)
1 small kb (topo recommends 2 long, we used 1 small). Maybe bring 1 long in case.
LA's: we placed 1 #2 that could have been avoided with a hidden cam placement. YMMV
Hooks: critical - 1 each
2 x 12' rope sections for Papa Pine (or better, bring a 40' section and just fix a line to avoid papa pine - save the tree).
Cam Hooks: 1 med, 1 thick.  I used these in a number of spots to avoid nailing.
Angles: We did not place any angles, but the original topo calls for them. I was able to place cam hooks instead (I'm lazy).
We used 70m lead line, 100m haul line. The long haul line made fixing to P2 easier.
Bolt kit - we never used, but if one of the few original harding plumber-tape 1/4" rivets goes, you're SOL without. Alternatively a long cheater stick might get you past a blown rivet.

You can sleep at the toe of the wall, down and west from the start of the route (short walk). There is also a bivy pad half way up the approach. Beware of rockfall at the base. And beware of bears at the base! It would be a tragedy to get up there and have your food stolen. We hung our food from the P1 anchor, then pulled it out from the wall by slinging a boulder (25' from the wall or ground). The base of P1 sucks - super loose. Recommend fixing a line to the base of P1, then using that to get up to the base with the bags.

There is a ledge for 1 at the top of 6. We squeezed two here, not fun. There is another spot up and left - in the interest of time we skipped it. In hind sight, might have been worth going up there.

Midway has a bivy spot for two (supposedly). You cannot see it from the belay, but supposedly it's way across the ledge (to the west). We just kept going up to Paradise.

Paradise Ledge - kind of disappointing given the name. Yes, better than a hanging belay. The actual bivy spot is far out to the right side (there are two older bolts out there). TBH, I'd recommend putting a two bolt anchor in at the top of the ladder (on the ledge). That would make this far more paradise-like.

I would be very unhappy bivying at any of these spots in a storm. If there's a chance of rain, bring a portaledge or pick a different route.

Retreat: bolt anchors the whole way down. Some pitches do traverse a bit. From Midway, it's probably easier to go up than down. 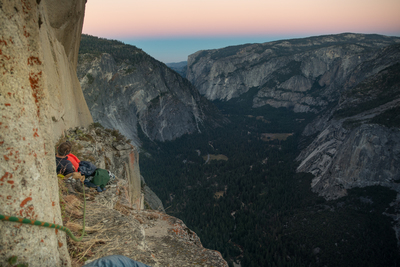 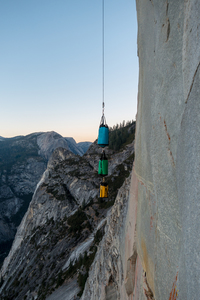 Hauling bags up pitch 10. This gives a sense of… 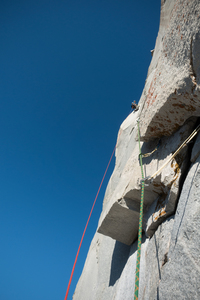 Pitch 10. This pitch was super fun and exposed.… 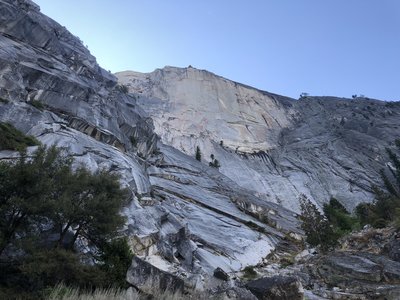 View from the base of the last talus field 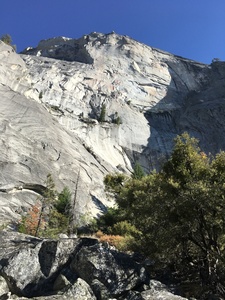 Looking up at the wall from the approach. It's… 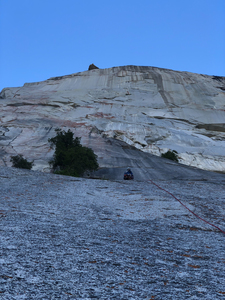 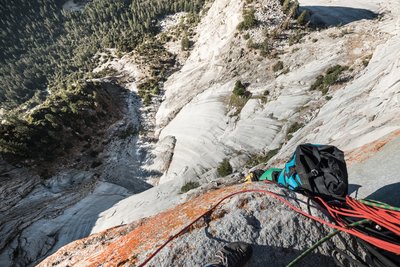 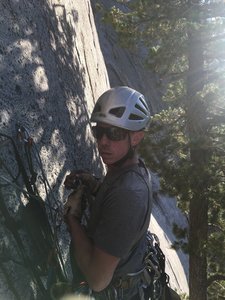