Ascent Into the Maelstrom

Routes in Monitor and Merrimac Buttes

Ascent Into The Maelstrom is a new wide crack masterpiece sure to entertain. This striking line is visible for quite some distance, begging to be climbed. If you like wicked squeezes, this one's for you.

P2) 5.11-
Very fun arm-barring with some really neat undulations. Bump #6s and leave green bros for the majority of the pitch.
Gear: 6-9"

P3) 5.11 R/X
Welcome to the Maelstrom. The wind funnels through the crack and multiplies many times over as it passes through the belay stance. It can be a 5mph wind on the summit, and feel like 30mph gusts in the funnel. Chimney up, and out passing two bolts. The chimney flares down and you'll awkwardly squeeze through a runnout opening with the wind creating an "exciting" sense of urgency. A #12 makes this pitch much safer, as placing blue-bros on the crux is not optimal. Once finally into the squeeze, climb another 80' of blue-bros to a funky/fun finish and an anchor on a ledge out right. The plateau is accessible via a short scramble to the right.
Gear: #6, #12, and many #4 Big Bros. Optional #5 Big Bro for the top. 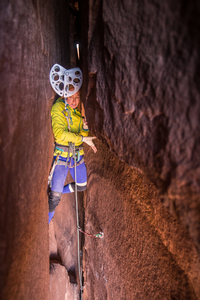 Pamela making the awkward moves into the squeez… 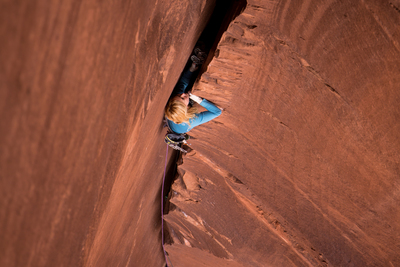 More About Ascent Into the Maelstrom