Closed February 1- July 30 for nesting Peregrine Falcons. As per the multiple National Monument signs, the entire south side of Pilot Rock (including all climbing on this page except the northwest gully) is closed for peregrine falcon nesting from February 1 to July 30. From the sign, "the small population found in Cascade-Siskiyou National Monument and the Soda Mountain Wilderness represents a significant achievement for the peregrine falcon population in southern Oregon. We appreciate the public support and cooperation that we continue to have for protecting these remarkable birds."

The obvious North West gulley that the trail dead ends to. BLM Oregon has a complete spray down of the beta https://www.youtube.com/watch?v=38VZuffSGo0

Amazing views of Shasta and the surrounding area.

When Dry:
It's a 3rd/4th/5th class depending on your definition and tolerance. You could easily wreck yourself if you slipped further up since there aren't huge ledges to catch you if you slip. You could put gear in if you wanted to.

(why there is a M1 rating)
In Winter:
I've climbed it a few times when there was snow and ice on it. Definitely a different ball game, but doable as an alpine like mixed scramble. Snow will obscure most of the holds/ ledges and the friction sections become completely slick. Crappy rock already so I wore crampons which let you actually use the small edges and bits of ice. The "vertical sections" that are in that BLM video one time had enough ice in them to actually swing a tool into. The top friction section was the least secure as we had to figure out which patches of snow were on small "ledges", and which just slid off. Not sure you could place solid cams in when the rock is super slick, and up higher not really places to put nuts.

The very obvious North West gulley that the trail up to Pilot Rock dead ends to. 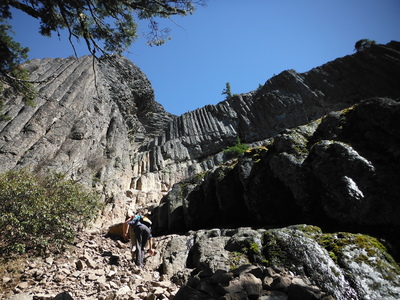 Approaching the gully in the late spring. Aweso… 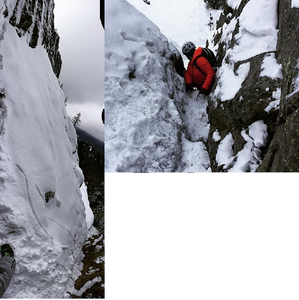 Thanksgiving 2016. Slick rock, veriglass and so…