Routes in 05. The Dark Passenger

I originally found this mini-crag while working on detailed hand drawn maps of the area. The mission was to pour over every inch of Dickie Ledge to find some gems that had been overlooked. I picked this line out easily when I noticed the steep wall perched above the more popular Dark Side. This route and it's brother were just what I was looking for. Near-vertical tech climbing with mixed gear and crimpy little cruxes perched in a magical location.

This one is a few feet longer than Worlds Collide. Start in the crack just left of the short slab that leads up to the start of Worlds. Layback and jam your way up to the first hoizontal and place a piece (there is a large block that vibrates but doesn't seem like it's going anywhere. Still, don't place any gear against it.) The business starts here. Match on a good crimp rail down and right of the first bolt. Make your clip and embark on a dicey technical boulder problem. These were the hardest moves for me and the sequence ends with a full on toss to a slightly sloping edge in the second horizontal crack. Place another piece of gear... shake off... Clip a bolt... and make another improbable set of moves on tiny "Dickie nubbins" culminating in yet another, even more desperate toss for the slopy cliff top. I placed the anchor about 5 feet to the right where there is an actual jug to clip or better yet top-out and have a seat. Unfortunately the last move favors folks (like me) with a good reach. The tiny holds involved may be nice for a smaller climbers hands however so best thing to do is head up and give it a try.

This thing will surely feel better on a crisp fall day than it did in the humidity I've been facing. Also both climbs on this face are much more reasonable with a few key hold ticked. Onsights would be extremely proud.

This route starts from a comfortable (no anchor needed) ledge above the Dark Passenger slab which is situated just left of the Dark Side area. It's basically a mini-crag all it's own and is the Namesake passenger itself.

Right now the easiest way to access the ledge and the mini-crag is to climb Say Nothing (5.5) to it's 2 bolt anchor. Bring up your second, easily step left on to the nice ledge and the base of Theater of Pain and Worlds Collide (5.11+).

*Say Nothing could easily be "4th classed" by folks who are solid on slabs and don't mind doing easy unroped climbing. the 5.5 section is right off the deck then it's 5.3 to the ledge.

2 bolts and a few pieces of gear (mainly finger sized) to a 2 ring anchor. 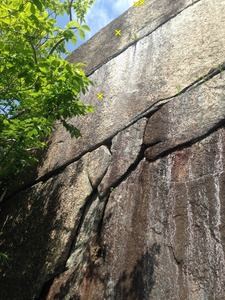 This is the line

More About Theater of Pain (L)