Routes in Sheepshead (AKA West Macdonald)

The entire peak, including the approach is located within the Flathead Reservation. A Tribal Permit is required for everything from driving to the parking lot to hiking to climbing. This is non-negotiable and should be respected as you are within the boundary of a Sovereign Nation.
You can buy a Tribal Lands Permit for cheap ($10 or $20) for an entire year at Bob Wards in Missoula or just about any gas station in St Ignatius.

A Spring-time route worth the bushy approach.
Start early in the morning to prevent being caught in cornices falling off the summit ridge. Several pitches of steep nevé and WI3 lead to two pitches past a rockband where M4-5 and maybe a move of M6 is encountered. Move up and traverse left(East) when you can to get out from under the 40' cornices looming 800' above. Climb 700' straight up on more steep nevé, paying attention the the great air beneath your heels. Obtain the summit ridge and meander easily up to the summit.
On the FA, we were lucky enough to have a car at the Ashley Lakes TH to make our walk out much easier. We descended the West Ridge to the Ashley Lakes and hiked out the trail. If the extra car is not an option, descend the East Ridge to the saddle between Sheepshead and Macdonald Peak and walk out the way you approached the N. Face.

Park at Lake Macdonald and follow the trail about one mile past the lake and then head south, across the creek and up the unnamed drainage that leads to the base of the North Face.
Beware: the approach is rather heinous thanks to rather intense bush-whacking. It sucks while you're in it, but have no worries as the climb is so good that by the first swing, you won't even remember all the cussing you did on the approach.
Expect 2-4 hours to get to the base of the wall, just three miles from the trailhead.

Whatever you can find. 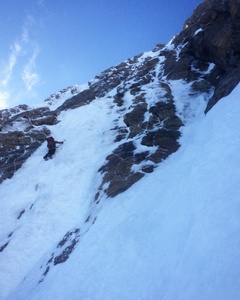 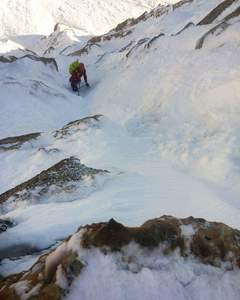 Damian Mast leaving the ground on the N Face. 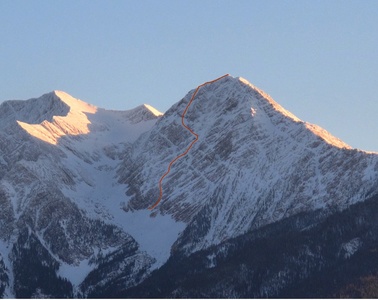