The air was mild and our hammock bivouac was not uncomfortable. We reflected on our route and happily concluded that this would be the most sustained climb either one of us had been on. The third morning, while Don was laboring with one of the more delicate pitches, I remained seated in my sling and scanned the vast Cascades around us. As we progressed upward, it seemed as though the mountains were also rising higher into the sky, their steep walls and ridges coming into true perspective. I tried to identify familiar peaks. It was like trying to distinguish waves in a restless sea of rock and snow. Through the heavily timbered valley, far below us, snaked the thin yellow line of the new road. The heavy construction equipment looked like ants, while the workmen were too small to see. I thought of the many people that would soon enjoy this area. To the east of the pass a parking lot was being graded. When I visualized gas stations and tourist stands that are bound to follow, my disposition changed. Could this become another Camp Curry (Yosemite)?

The Independence route is a quintessential Cascadian rock outing due to its location and history. The route's progressive ascents epitomize the generational changes in climbing in the PNW. The FA was done wall style the 1960s by two of the region's top climbers, who placed 180 pitons and five (3/16") bolts over 4 days after approaching from a much farther trailhead than the current highway provides us. The FFA was in 1991, representing an unheralded ascent of sustained difficulty by two strong locals who boldly freed the line without adding fixed gear (they did yo-yo style leads on two pitches and did it in 2 days, either fixing and returning to the ground or with a portaledge), and they succeeded on what was among the hardest rock climbs in the state. The Independence finally saw perhaps its first ground-up modern redpoint (and modern beta and photo sharing trip report and introduction into the wide world of modernity) when Jens Holsten and Max Hasson freed it in 2009.

The route topo and corresponding free grades in the Cascade Alpine Guide come from the first free ascent team Steven Risse and Keith Hertel, from 1991. Tragically, Risse died 18 months later, along with fellow Washingtonians Mark Bebie and Thomas Waarsdorp while climbing Slipstream. The team's benchmark free grades are unlikely to be downgraded despite the fact that we benefit from much more beta, cleaner rock, more information, and better equipment. The Independence saw its FSFFA (first second first free ascent) in 1995, when local guides Eli Helmuth and Steve House worked on the route for a few days, added some hardware, and Eli made a free ascent, though it avoided one of the crux pitches with an easier optional pitch. The two had not read the 1992 AAJ which described that the route had previously been freed. By the late 90s, fixed rappel anchors (though not all bolted) allowed easy rappels from atop P8 with a single 70m rope.

In the past few years I and partners have removed a few old bolts, tree snags, and cord from belays where new bolts exist, or we directly replaced a few old bolts with new ones. I also added 2 bolts on a belay ledge atop P3, where a piton and large slung horn provided the belay shown in the '91 topo. The only functional change, in the interest of free climbing, was to eliminate the need to use the hanging belay atop P7. To this end I added a single bolt at a no-hands stance partway up the pitch which already had a piton and very small cam placement. Using this spot to belay will make a shorter and easier P7, which had been the crux pitch, and will make P8 more difficult off the belay. By breaking up the only .12a pitch with a free belay, it also might make the route realistically a sustained 5.11+ with the cruxes being P5 and P8.

P1 5.8 - Start at the right edge of the east face. Follow horizontal breaks and cracks up and left, then pop up and right to a belay ledge near a yellow lichen patch and a pine tree.

P2 5.10a/b - Crimp up and right (bolted) then move left along a flake to a belay below a nice left-facing corner. At the end of the traverse a pendulum was necessary and while I studied the situation the flake supporting the pin I was using broke off. Though the second piton was not worth much either, the third brought me to a comfortable halt. After regaining the twenty feet I had lost I executed the awkward pendulum and settled myself in a sling belay.

P3 5.10b  - Climb the left-facing quartz corner. When just below 2 bolts go hard right, stemming to a ledge ("long ledge with big horn") and a new 2-bolt anchor. A direct finish version passes a 2nd protection bolt via a 5.11- sequence, and one can then step down/right to the same anchor and ledge, or combine P3+P4.

P4 5.8 - Pass the snag and climb the chimney/OW for 40' to a small alcove under the red-colored Baer Ceiling. "After stemming up a narrow chimney we reached the “Baer Ceiling.” As Hans before us, we could see no cracks ahead but only an endless succession of ceilings and overhangs. Discouraged by the slow progress and thoughts of a bleak future, we strung out our hammocks for the night."

P5 5.11c - Climb out the ramp on the left, which becomes a shallow corner. Cruxy face moves continue up and left, then back right. This section has a fixed pin and large copperhead, but requires some small cams and wires. Continue up easier moves to a mantle and a bolt-protected 5.11a/b slab move, finally reaching an easier lieback flake and a belay just right of the Block Ceiling. This pitch might be the sleeper crux of the route, and was not climbed by the 1995 team who put in a bolt and climbed a 5.11a alternate pitch off to the right of the Baer Ceiling.

P6 5.11b/c - Swing out left to the thin crack, protected by pitons and good small gear. Pass the 3 stepped "Cascade Ceilings" where a few more pitons and some small cams lead to a mantle.

P7 5.11  - The original aid (and free) climbers moved all the way rightward to the pine tree, then went straight up the shallow left-facing corner. Most modern climbers will not be spending a hammock bivouac suspended from the tree, so it's less rope draggy to execute a head-high traverse rightward off the belay, then ascend the flake upwards a few meters before traversing right into the shallow corner above the pine. Continue a few meters up the corner and belay on a small stance with a bolt and piton. The traverse to start this pitch was rated .12a by the '95 team, but 5.11 by the FFA team. Either way, it's reach-dependent and a short boulder problem and could be climbed A0.  "After gaining the third ceiling I was forced to place two bolts for a traverse to a flake nearby. Even though they were only 3/l6-inch studs, drilling them into the unusually hard granite of Liberty Bell was exasperating and time consuming. With friction on my rope I proceeded to nail downward along the flake and then across a ceiling with a small pine tree growing out from under it in a 180° arc. The tree made a convenient anchor for my belay seat. Don reached a small ceiling above before darkness overtook us. The air was mild and our hammock bivouac was not uncomfortable. We reflected on our route and happily concluded that this would be the most sustained climb either one of us had been on."

P8 5.12a -  Climb technical and classically granite moves off the belay, passing a bolt added by the '95 team, who called this section .11+. Pass the 4 (mostly old) belay bolts at the hanging belay under the huge "Well Hung Ceiling". Stem and jam up the exposed steep corner. End at a tree where the angle relents, or push on all the way to the ramp above.

P9 5.5 - Move the belay up and left to the high point on M&M ledge. (large and sloping; satisfactory for bivouac)

P10 5.8 - Start several meters right of the bolted anchor. Climb a chimney and blocky corner past some red-tinted roofs, ending on a small terrace area below an obvious splitter wide hands crack. An alternate option, originally climbed on the Barber Pole route, follows the left-trending ramp directly above the belay anchor, then face climbs up and through a squeeze to the same terrace area.

P11 5.10 - Climb the nice splitter 2-3" crack up to the clean slab and its bolted anchor under the Hercan Roofs. Leave the cord on these bolts. "One long bong-bong crack left us under a maze of proponderous roofs. To our amazement the class-5 climbing continued. The rock was quite broken up and since it was also stable, it allowed for some classic rock acrobatics"

A worthy route-service action would be to clean up at least some of the 4 old bolts and tat from the hanging belay stance under the Well Hung Ceiling (P8).

Start on the far right/north edge of the east face. Locate the red colored roof/alcove of the Baer Ceiling about 85m above. This is the top of the original P4. 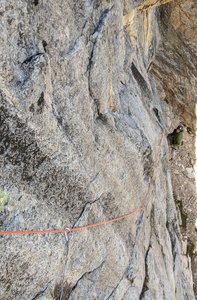 Matt Carroll follows the second pitch of The In… 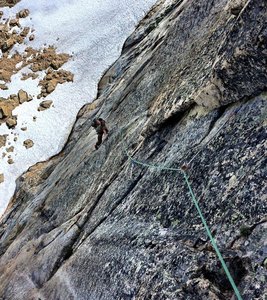 Michal on (I believe)P4? Great position and cli… 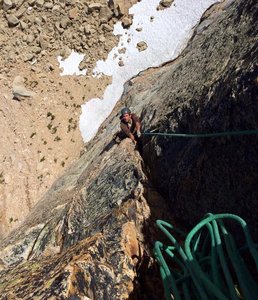 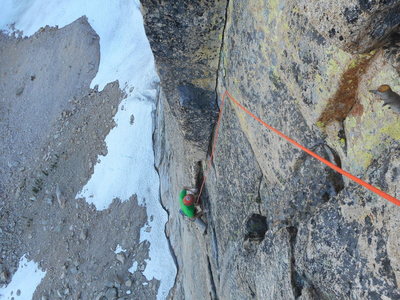 More About The Independence Route