6 pitches of Swiss climbing goodness! This runs up the middle of Pfriendler, from the lowest point to the top. Like a lot of routes here it's bolted, but those bolts can be spaced a little far apart if you're concerned about hitting a ledge or decking.

P1: 5.9: up the slab, then to an arete. follow the line of bolts up to a hanging belay
P2: 5.8: up and over the block where the anchor is, then follow the route up and left to the wide grassy ledge. The belay anchor only has 1 bolt, so you should supplement it with a nut or cam.
P3: 5.10a: up the chimney, then up a series of jugs and rails to a narrow ledge anchor. Not a hanging belay but close
P4: 5.10a: from the anchor, go up and left to the slab. Up and over a little headwall, then up and right on slab to the roof. In 2018 there was a fixed nut on the way to the roof; if it's not there you may want to place one. Move over the roof, then up and left to a real nice ledge for a belay. My favorite pitch of the climb!
P5: 5.9: Move left and up, and keep following the bolts over a series of ledges until you get to another chimney. Chimney is a bit runout so supplementing with a BD#1 cam isn't the worst idea. After the chimney you surmount a flake (and step across) to a two bolt anchor. You can also skip the flake and move up the corner then traverse left.
P6: 5.7: Just go up to the top. Follow the bolts (some of which are hard to find) and get to the two bolt anchor on top. From there you can rappel down (rap line climber's left of the anchor 10 feet) or climb to the summit of Pfriendler (not hard, but you probably want a small cam or two)

Middle of Pfriendler. Starts from the lowest extreme of the rock.

Bolts and trad gear. The route is bolted but climbers should also bring a small set of nuts and a few cams (0.5 - 1) 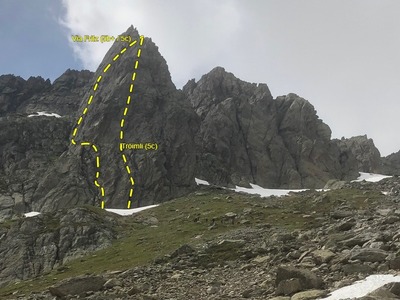