Your first goal is the gain the saddle between Tijeras Peak and Music Mountain. It makes the most sense to climb one of the two 3rd Class approach gullies described in El Camino de Cabra. I used the upper gully as it deposits you closer to the saddle. Use caution early season as there will likely be snow in the gully.

Once at the saddle, turn north and study Music's South Ridge. Generally follow the ridge crest, occasionally stepping left or right of the ridge to keep it at 4th Class. The only 5th Class climbing on the crest comes at the big notch, but you can keep it around 3rd Class by dropping west off the ridge and regaining it shortly after the notch pitch. More scrambling after the notch takes you past false summits until reaching the true summit at the north end of the ridge. The rock is of exceptional quality most of the way, and the combination of movement, position, setting, and solitude made for an excellent experience.

Retrace your steps back south back to the false summit where the East Ridge of Music Mountain terminates. Pick your way down the steep but mostly 2nd class East Ridge, encountering a few easy 3rd Class moves on the way. Eventually you'll reach a grassy area where the ridge mellows. Find the grassy descent gully on the South side of the ridge that points down into the high basin above Lower Sand Creek Lake.

There is no fixed gear and not much natural protection. It is best done solo. 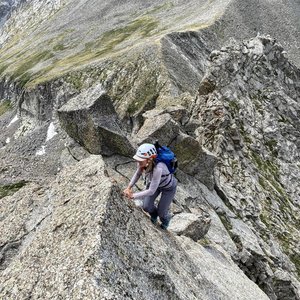 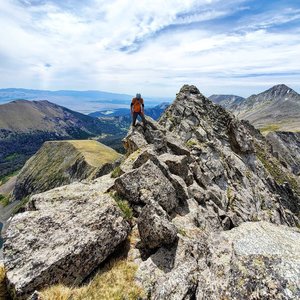 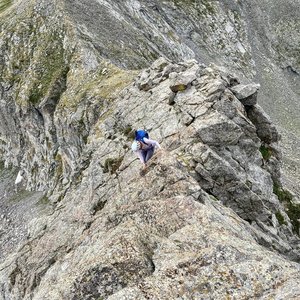 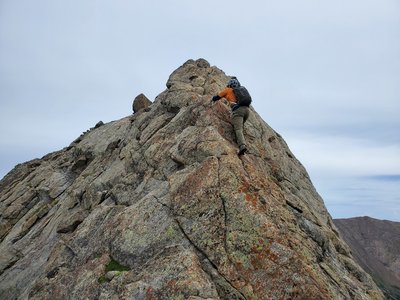 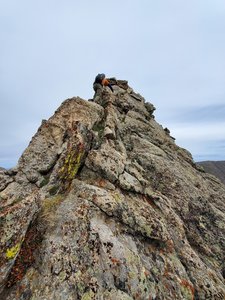 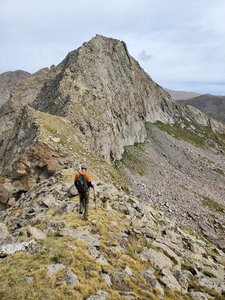