From the South Face of Otis, the ridgeline to the east of Sharkstooth looks quite fun. It turns out that it is. Clearly, the best way to get there is to climb a route on the Cathedral Wall. We found that Tourist Tragedy worked quite well for this. From the notch in the ridge above that route, scramble west out of the notch. From here, delightful ambling (if you are into that sort of thing) up a grassy meadow replete with wildflowers leads to a the rocky part of the ridge above the Foil, Saber, et al. This ridge leads to a first gendarme from which a two nut rap station can be found just NW of the summit. More ridge maneuvering leads to the second tower which can be ascended by avoiding the steep step on the north side and climbing up to the summit. There is an anchor on top of this. A single rope rap to the north accesses easy scrambling terrain to the base of Sharkstooth. This leaves one with a decision to make about which route to climb on Sharkstooth. Unfortunately, the East Gully is the most convenient. 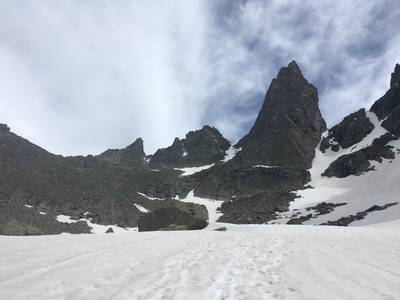 The rocky part of the ridge.