See 2 page topo.  I put in this very dangerous route (A6) possible ground fall on first 2 pitches, with no bolts. Yea, there are zamac rivits and no , zamac rivits are not bolts. People that claim rivits are bolts are the same people that believe that bolts smaller than 3/8" should be replaced with sport climber bolts. They make this claim to suit there own style or lack of style. While these people fall all day long on 1/4" bolts they won't on 1/4" Zamac rivits, with good reason. Zamac rivits are body weight anchors - not bolts.

Steve Schneider  rapped down the bottom of Ready to Go and got on this website. While spraying hate fueled comments, he claimed that my potential ground fall pitches were A2/ A3. He then made this a reality by climbing, with various partners, his own route ( Bellagio), with lots of bolts, on top of my no bolt route. He had just previously drilled bolts where ever he wanted on Gerberdines' Allied Forces. Back in the day, Schneider chopped an A5 pitch and then shit on the Wings of Steel ropes for no good reason.

I chopped some of Bellagio on rappel. Upon reaching the last anchor before the ground, who should I see at the base but Schneider himself. I questioned him about his bolts on my route and he insisted that he didn't drill any. That was strange, because I'm looking right at his bolts, the bolts his belayer told me he drilled. These weren't bolts on his bolted start, these were bolts on my route. He hiked out before I reached the ground, so there was no epic confrontation.

Good or bad climbers that show no respect, and drill on other peoples route should experience consequences. I haven't chopped bolts in years but felt called to act.  So now Ready to Go and Bellagio are both mangled routes.

A6 rack with 18' stick for first move 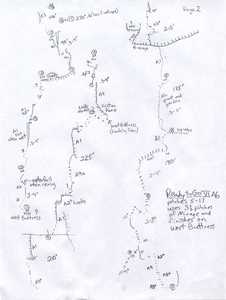 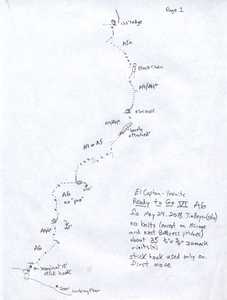 More About Ready to Go