This is the easiest of a trio of routes on the Northwest Face of the Aiguille du Midi. Though it is the easiest, it is still a route deserving of respect and in addition to the difficulties here, the Cosmique Arete must be climbed to finish. It's a quality route but definitely not as good as, say, the Chere Couloir on Triangle du Tacul but it's a worthy experience to a seldom visited side of the Midi.

Approach: Descend the route one of two ways; either from the south end of the span between the towers at the Aiguille du Midi lift station with two ropes to the base of the route. Follow the Cunningham Couloir for roughly 800' until the route is obvious on the skiers left side of the couloir. Or, climb to the first false summit on the Cosmique Arete and rappel the route via 6 60m rappels. Some of the anchors are not obvious or are buried.

P1: AI3 M4 60m Climb the corner over mostly ice and some rocky bulges. The rock is very compact in this section so reliable rock pro is not available. Early season likely yields better ice conditions. Belay at bolt and nut.

P2: AI3 50* Snow 60m Climb the steep step up the corner/chimney. Finish on steep snow to a thread anchor on the left that can be backed up with a hand sized cam.

P3: 50* Snow 60m Climb the snow to an anchor on the right. This anchor was not apparent to us, or was buried, on our ascent so I built a nut anchor out left and grabbed it on the way up.

P4: M2 50* Snow 60m Climb snow and the odd rock step to bolt anchor on the right side of the couloir.

P6: M3 50* Snow 50m Climb into the corner feature passing a few rock steps with good hooks and good gear to a niche belay on the Cosmique Arete. There is a two nut anchor that I left here.

Finish on the Cosmique Arete.

Northwest Face of the Aiguille du Midi. Take the lift to the second station and rappel via the span or down the route after climbing the Cosmique Arete to the first false summit. 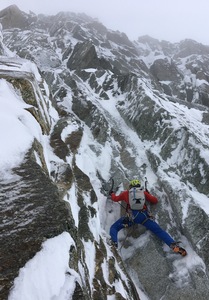 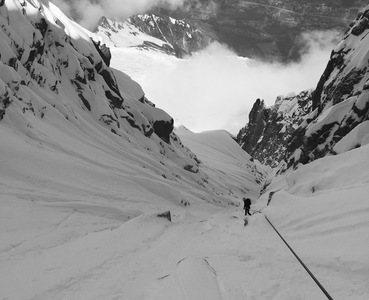 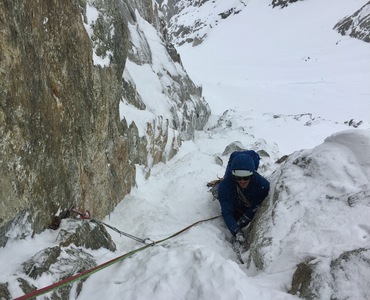