Special Closure Order #03-05-05-18-002 (found here: fs.usda.gov/Internet/FSE_DO… ) prohibits travel more then 400' off of established trails due to Bighorn Sheep lambing season. This order appears to be valid until September 20th, 2019.

The Forest Service as closed all areas in Mount Lemmon until November 1, 2020 because of recent forest fire activity. Climbing is not permitted at this time.

Void of Form climbs the long buttress of rock that ends at Pontatoc Peak. The name was given when the first ascentionists of Shelter From the Storm named this massive chunk of rock the "Void of Form Buttress" after the Bob Dylan song. While Shelter From the Storm (and the only other route on the cliff at the time of writing) ascends the top half of this buttress, the first pitches of those routes climb cracks to the right to access the big grassy ledge, and then hike East to access the upper half of the buttress. The unpredictable character of the protectable features on this banded gneiss cliff led to the near death of a member of the first ascent party. In contrast, Void of Form climbs the entirety of the buttress from its lowest to highest aspect, and climbs impeccable (albeit naturally unprotectable) rock for the majority of the route.

Ten pitches of moderate but exciting climbing leads to an excellent summit, and one of the best walk-offs around. Most of the belays are on big ledges (with the exception of the 10" wide 6th pitch belay ledge), and a bivy could likely be fashioned in many places, including the summit. However, the climbing is mostly easy (5.5/5.6ish), and even the slowest parties should be able to pull off the climb in a day (hence the grade III rating).

This route is something unique for Tucson and Southern Arizona, as it is currently the longest sport route in the area, and one of the longest in the US. At an easily accessible grade of 5.9 and equipped for fast retreat with a single 70 meter rope, this route is recommendable to almost any climber. Finding, cleaning, and establishing this route took five months of effort. The hardware is all bomber and should last for decades.

The pitch breakdown: (lengths are for rappelling, not necessarily the climbing line; star ratings are subjective)
1) 5.8, 30m, *: A low first bolt marks the start of the route. Climb easy ledges to a bulge, navigate around it, and then climb more easy ledges. Finish out right on a steep bowl of rock with good holds. P1 ends on "Prickly Pear Ledge".
2) 5.7, 35m, ***: Climb straight up the ramp from the belay, clip a traverse bolt for the follower, and then cross right to the main wall and a nicely featured slab.
3) 5.9, 35m, ****: Start at the left of the belay ledge and climb left around the arete, or straight up for extra spice. An airy and unlikely move left at the 4th bolt and a horizontal crack brings you back to slab terrain. After several bolts of slab, cross right at the tree (easier to cross low), and follow cracks to the belay. If retreating after pitch 3, rappel to climber's right of the tree (the bolts are climber's left).
4) 5.8, 20m, ***: an airy traverse left from the belay (photo-op) leads to big holds on a vertical face.
5) 5.8, 20m, **: a second (smaller) traverse pitch leads to the half-way ledge. Combine with P4 for efficiency, or split it in two to keep an eye on your climber.
6) 5.9, 30m, ***: a difficult start right above the belay leads to a vertical face with good holds, passing one huge ledge to arrive at an exposed belay on the smallest ledge on route. It is possible to link with P7 to skip the semi-hanging belay, if desired.
7) 5.8, 30m, *:  a crux off the belay and run out after the first bolt leads to the 200' adventurous section of mountaineering-esque climbing. It would be easy to get lost here, but if in doubt the next bolt is likely straight up. Try not to fall between the first and second bolts, as you will likely impact your belayer.
8) 5.7, 30m, *: more mountaineering-esque climbing leads to a big ledge at the base of the crux overhang of the next pitch. Links with P7, slings may help reduce rope drag.
9) 5.9, 35m, ****: two bolts of overhanging bucket climbing leads to a difficult mantle (crux of the route). Surmount the crux, and climb sustained face and cracks to Black Widow Ledge under the giant roof.
10) 5.8, 20m, ***: walk far to the left to clip the first bolt, then climb up to a corner. Find a way to get established in the corner, and finish on the face to the right. It is ***highly recommended*** to step right over the roof after clipping the last bolt, look down at where you came from, and savor the exposure before pulling onto the summit.

Belay your partner to the top and then enjoy the nice hike down Pontatoc Ridge Trail with views of the Tucson basin.

Approach via Pontatoc Canyon trail. 0.2 miles after crossing the main drainage, which is followed by a large flat patio-like area to the right, exit the main trail at two cairns forming an entrance to a sub-trail on the right (32º20'41.95" N, 110º53'31.02" W). Follow this trail until it turns to slabs, then cross the drainage at cairns. Follow more cairns up the boulder field, aiming for the toe of the buttress. At the top of the boulders, a short slab scramble leads to the final section, becoming a game trail that leads to the base of the route. The final 40 feet of approach passes a wooded section, then turns right into it to find the first bolt between the trees.

It is recommended to leave nothing at the base and do not try to haul on this route.

16 quick draws for the longest pitch (P9), though skipping bolts is definitely an option where the climbing is easy.
The route will likely feel over-bolted for the 5.10+ climber. While the cruxes are well-protected, due to the low angle nature of the wall there are several do-not-fall zones, especially given that a rescue 700 feet off the ground would be complicated at best. All anchors are equipped with chains and retreat is straightforward with a single 70 meter rope (but not possible with a 60).  You will need a total of 19 draws if you combine P6 and P7 and plan to clip all the bolts on these two pitches. 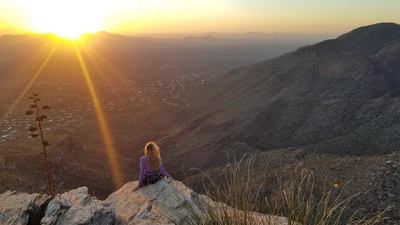 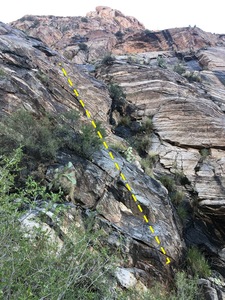 The start of the route. 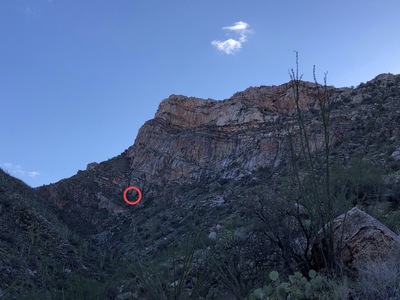 The route starts right about here. 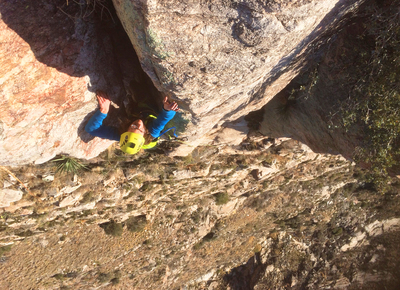 Peter Senchyna on the crux 9th pitch during the… 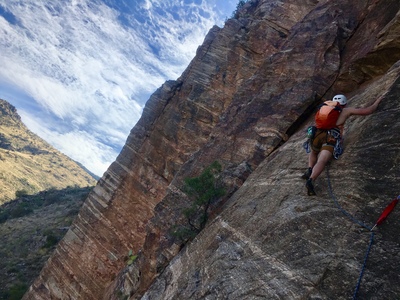 Pitch 4 traverse with the angle exaggerated in… 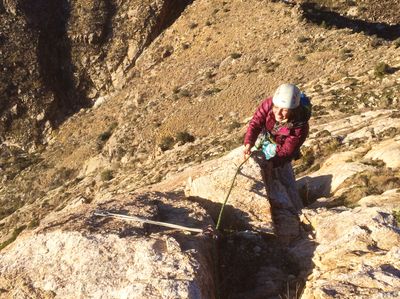 Allie Burnett topping out on the first ascent. 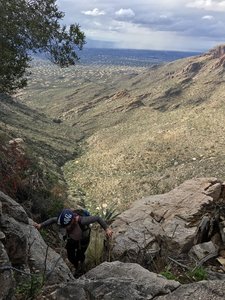 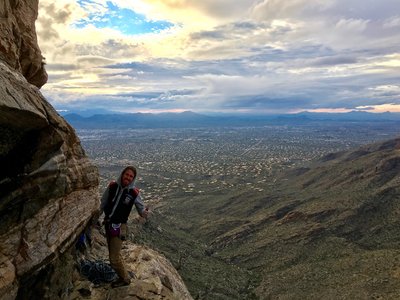 Benoit Blanc on the final ledge of the route. 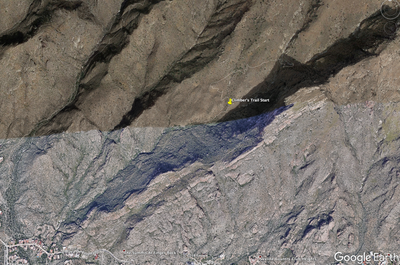 The climber's trail branches off of the Pontato… 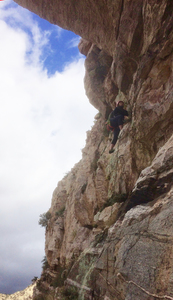 Ann-Marie Maly about to step out over the giant… 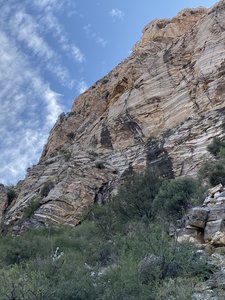 The beginning of the climb 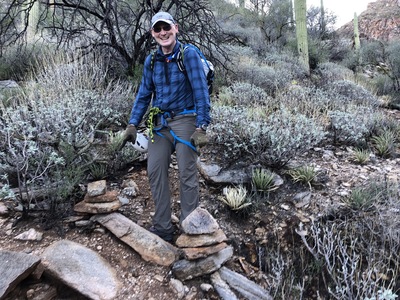 Entrance to the climbers trail.

More About Void of Form