Routes in Learn To Fly Cave

Start of the left side just inside the cave. There seemed to be two lines of bolts for the first half. I found clipping the newer looking bolts slightly left of the route/holds worked best.

Continue up as the route steepens, following good holds and using clever body positioning to weave your way under and around huge featured features. Some hard up-side-down moves and mantling lead to a cave atop the inside of the roof where you can rest. Then find a way to move out right and up to the lip - and save some power and creativity. TO gain the chains form the last clip is a bit devious - footwork and bodyweight distribution are key - I would call this the crux, especially if it's your first go.

Clip chains, turn around, and take in the ocean from your perch atop the crest of a sea-side cavern.

But clean falls, great bolting, and ever better holds, make this a classic in my opinion.

There's a group of routes just outside and leading into the left side of the cave - this is the right most two bolt lines. I found the newer bolts on the left to make a better line, and all are easy to clip from the rout - the older ones are a bit more zigzag. But be careful because there's another climb closely to the left (sometimes less than a foot away) that's a decent bit harder.

I was able to identify most of the roof bolts from the ground, but some are hard to pick out until you're up there. 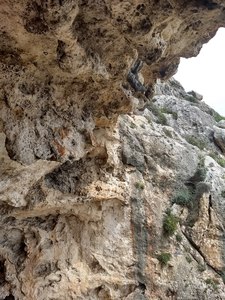 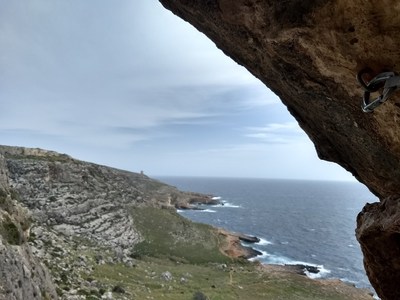 View looking out from about halfway up?