Buildering is a dangerous and illegal activity that can result in serious injury and/or death. The climbing featured in these area shouldn't be attempted unless you want jail time and hospital bills.

The North Face is the biggest unbroken face on Macky, with 2 sections divided by a roof. This is no easy undertaking...small holds and long sections of unbroken climbing make for an exciting climb. It is best climbed at night as it is illuminated with orange lights for the whole city to see. The crux is climbing this faster than the cops will arrive. If you get shut down on the headwall, you will be doomed.

Featured in the film: Real Rock an Urban Climbing Experience coming May 2019.

TR, you could sling a light. It wouldn't do a lot.

Macky has also been the site of non-performance incidents. In 1953, someone made it to the top of the towers by climbing the walls without any equipment (assuming via the east step route).

Twenty-year-old Jacquette, an organ player, was murdered in Macky. Morse, the culprit, was caught and eventually tried and sentenced to 888 years in prison. The murder room is still used, various commemorative ceremonies have been held there. It’s also a prominent stopping place in paranormal investigators’ itineraries. Basically Macky is spooky. Claims have been made that a ghostly woman can be seen roaming the halls of Macky and that loud organ music is played late at night when no one else is in the building. 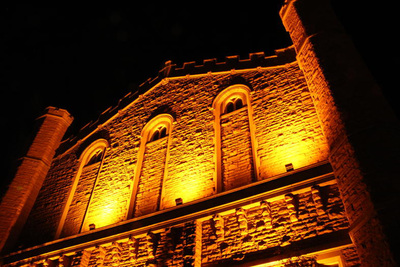 Night sets in on the north face.

More About North Face of Macky