Broken Wings is a magnificent route on perhaps the most impressive north face in the Lost River Range. The pioneer of hard mixed climbing in the range, Dean Lords, along with Abe Dickerson and Aaron Mordecai, made the first ascent in May of 2005. Climbs of this nature are highly dependent on the weather and perfect conditions. Joe Crane and myself were not able to climb this route until our third attempt. In the spring wait until enough snow has melted off the face to decrease the avalanche danger, then wait for a week of warmer weather followed by a week of cold weather. Ideal weather patterns for an early winter ascent are still a mystery (to me at least), Joe and I just got lucky.

The majority of the route follows tight chimneys all the way up the face.

Begin by ascending the prominent snow slope below the route. Stay to the left as the slope begins to narrow. The slope will terminate at the base of an 80 degree chimney. A perfect belay cave can be found here if not buried under snow.

Pitch one goes up this chimney and navigates under/over/around 3 chalk stones if I remember correctly. The chimney abruptly ends with several large overhanging boulders.

Pitch two begins by exiting the chimney to the right to access a snow field. Depending on the conditions this may require a few mixed moves to navigate around the overhanging boulders. Once on the snow field move up and left to the base of another chimney.

Pitches three - five (the money pitches) follow this chimney for several hundred feet. The chimney is initially less than a meter wide and offers stellar climbing. Towards the top of this pitch the chimney widens for maybe 15 meters before narrowing again at the start of pitch four. Pitch four contains several chalk stones that offer vertical to overhanging climbing. Depending on conditions this chimney may be full of ice or terrifying sugar snow mushrooms. Pitch five continues up the chimney until it widens out into a snow slope.

Pitch six follows the snow slope up and gradually to the left. The slope will eventually end at a featureless slab jutting out of a low angle chimney.

Pitch seven will vary depending on the season. Dean climbed up the terrifying slab and onto the final snow slope. Since we climbed it in November the chimney was only partially clogged with snow allowing us to tunnel our way up behind several chalk stones that can be slung for protection. Once exiting the chimney turn right and follow the snow slope to the ridge.

Once on the ridge traverse west to where Sacajawea and Borah meet. Here, depending on where you parked/camped you have several options. You can follow the Borah trail down to the parking lot, or you can turn north and follow the Borah trail to the base of the final steep section leading to the summit. Turn east here and make your way down a steep snow ramp back into the canyon. If you must you can also descend the south face of Sacajawea and bushwack your way out the drainage between Borah and peak 11308 although this is not recommended. 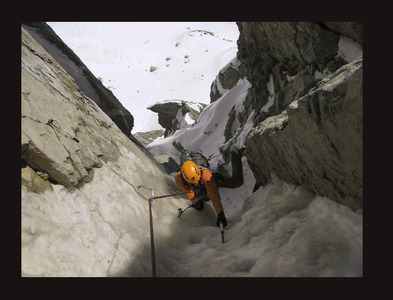 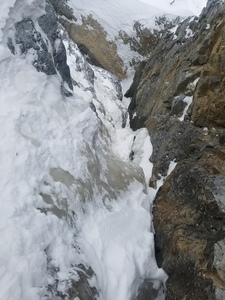 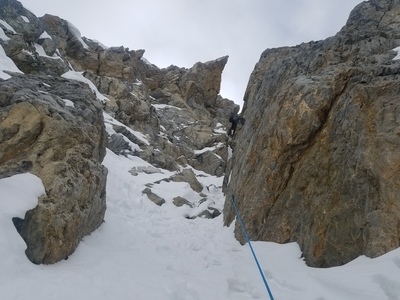 Looking up at the end of pitch 3. Photo: Joe Crane 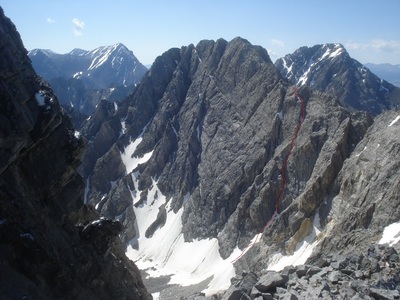 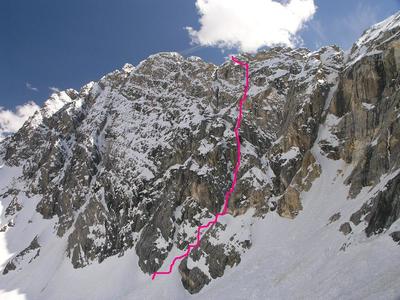 Broken Wings on the North Face of Sacajewea. Ph…