The Santa Barbara Ridge is a fantastic technical route to the summit of Cayambe, located on the north aspect of the mountain. It is a relatively new route, pioneered in 2012. It is not often climbed, and when it is, it is usually done by the IFMGA Alpine School of Ecuador. The route is rated TD, and mostly takes place on mixed terrain, followed by steep ice and steep now. Climbers will follow the Normal Route (south side) until around 5100m and then begin navigating around the mountain to the north side. There are two distinct rock ribs on the north aspect of the mountain. Gain the west rock rib with two pitches of frozen scree, ice, and mixed climbing. Then traverse to the east rock rib. The route then continues to veer east over the east rib. Finally, a large moderate snow field is gained, which then evolves into a traverse to the summit ridge. There is a map of the route inside the Cayambe hut, but nodobody really seems to know how to interpret it.

The crux of the climb is the 3rd pitch which traverses between the west and east ribs, which features some sporty mixed maneuvers. There are several sections of near vertical ice almost resembling waterfall ice. Gaining the summit ridge requires a long lateral traverse over moderate-steep snow that is not clearly protectable due to snow quality high up on the mountain, where a fall would be fatal so care must be taken. (Hence the PG13 safety rating.)

Descent is done by the Normal Route back to the hut. A standard hut to hut climb is appropriately 15 hours, starting at 2am. This is a little late but Ecuadorian standards (high daytime UV), but it’s better to hit the crux with a bit of sunlight, unfortunately, likely putting you on a baked glacier on the descent. Reversing the route could be quite challenging.

I believe that if this route were on a Cascades volcano, it would be considered a mega-classic. 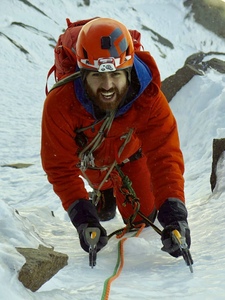 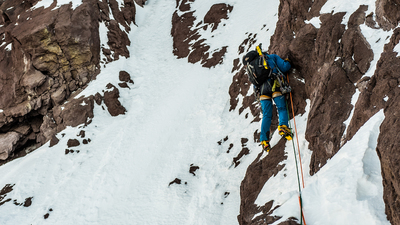 Nacho on the crux! 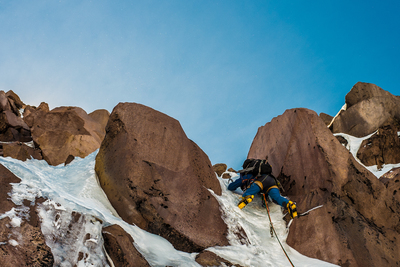 A bit of steep ice up high on the route. 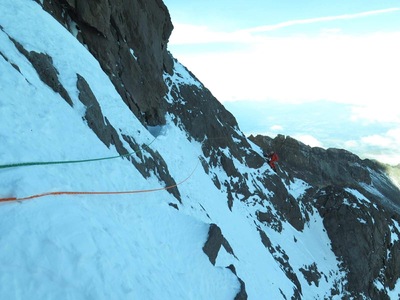