This route climbs the huge east face of Little Squaretop Massif and then tops out on the summit. To the best of our knowledge, the route connects the first two pitches of the Bowl Route with the last two pitches of Lost Carabiner (these old routes are described in Ingraham's guide web.nmsu.edu/~amato/ingraha…). The only evidence of previous climbing we found was an old bail sling around a short, rounded horn atop P2. This horn was far from confidence inspiring, in terms of the idea of rapping off it. The money pitch of the route is P3, which connects the two old routes.

Follow the approach for Pirates of the Carabiner, but start climbing from the level of the Nose, near a big pine, rather than scrambling down to the bottom of the wall as for Pirates. The first 3 pitches of Slung Horn are on good, fairly clean rock and most of the pitches are ~200ft out of necessity, i.e. because good belay station options are simply that widely spaced. Pitches 4 and 5 are quite dirty and loose, but they still offer some challenging sections as well as a summit bid and plenty of incredible views.

P1 (200ft, 5.6): from the Nose, climb up toward a chimney-like gap (see photo) near the left edge of the rib. To make this work with a 60m rope, scramble up 10-15ft before you start belaying. Once on a ledge within the chimney, build a gear anchor in the one good crack (small gear) at climber's right.

P2 (200ft, 5.8): Climb out of the chimney on the left side, and then veer right up a long ledge/crack (big gear), with a steep dropoff to the left. Eventually this feature gives way a more gently inclined, slab section with lots of good anchor options. It was at this belay station that we found the scary slung horn.

P3 (200ft, 5.8+): From here, the original Bowl Route would traverse up and left on the gentle slab below the the 5-10ft roof. Instead head up an easy-looking gully to the right, which leads to another long feature, similar to the P2 ledge/crack but slightly steeper. Eventually you can get out of it to the right, where some anchor options are available (small gear).

P4 (180ft, 5.8): Having found yourself in the large gap between roofs to the S and N, bushwack up toward the N roof and then climb the gully below. This pitch is not easy, but it is very, very dirty. You will likely find yourself literally digging through dirt for handholds, using the old knee-in-dirt trick several times, and perhaps even chimneying long sections backwards, i.e. with back to the wall. When you start running out of rope, emerge filthy onto a ledge at left which has good anchor pro.

P5 (200ft, 5.6): if P4 was the dirt pitch, P5 is the loose pitch. Continue up the gully being careful about everything you touch. Eventually emerge onto the ridgeline and hope the Sun is still up. Sling a boulder or build a gear anchor.

P6 (200ft, 4th class): Scramble down from the ridgeline and then bushwack/scamble up a gully to the left which leads to the summit.

For descent, the best option is rapping into the Little Squaretop/Little Squaretop Massif gully, then taking the Organ Needle trail back down to the west. For a more adventurous descent, traverse the ridgeline north toward Squaretop and then down Squaretop gully, where you can eventually rejoin the Tooth trail.

Double rack, with at least one #4. A variety of small gear (#0.1-0.2) is also useful as is a set of nuts. Bring enough slings to extend all placed gear. 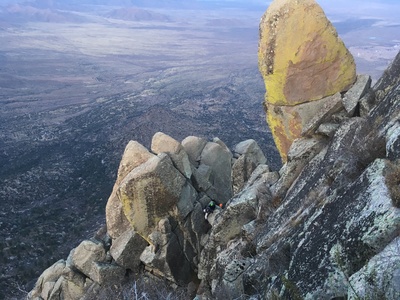 Marta, Jordan, and Ben emerging onto the ridgel… 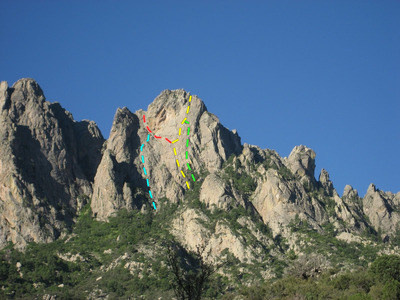 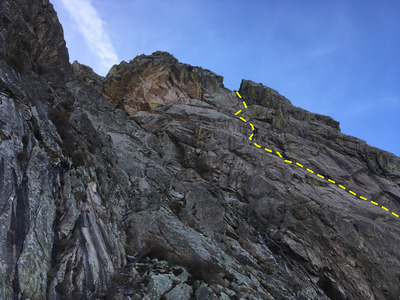 Rough path of P2-5, viewed from well south of t… 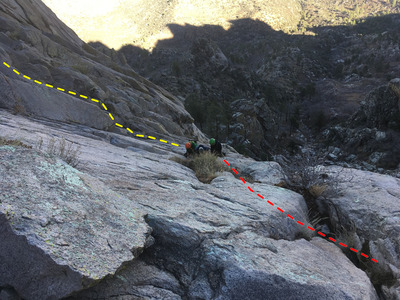 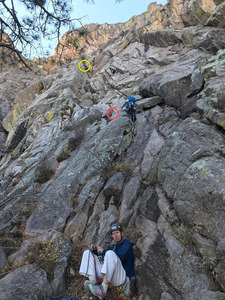 Start of the route. The red circle show about w… 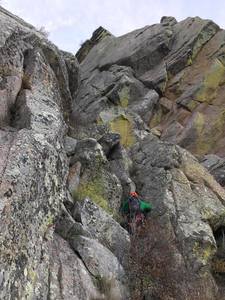 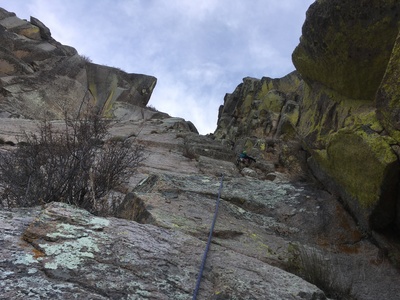 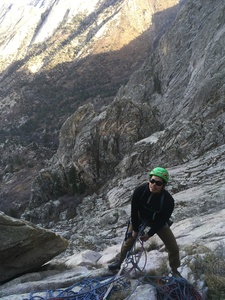 Jordan Nicholas at the P3 belay. 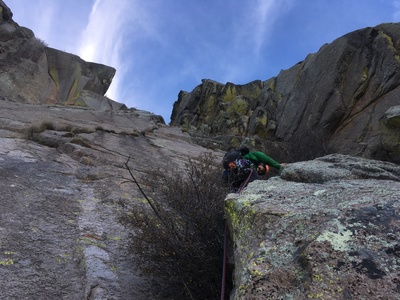