This is one of the best single-pitch crack routes I've done, and I'm surprised that it's not on here yet. As Mike says in the guidebook, this is the showpiece crack climb of the Lake Region, with flawless rock and lots of unique, complex movement. Thin fingers and good body position awareness helpful...

As with many routes that I post on MP, there is a story behind this one. As most climbers will know, we lost two shining lights this year; Inge Perkins and Hayden Kennedy. Hayden was a good friend to so many, and when we all saw how happy he and Inge were we were elated for them. A pivotal memory I have of the two of them is looking over during the finale performance of the best 80s cover band I've ever seen, playing Prince's "Purple Rain" at Zack and Tara's wedding. The rendition was unbelievable. At some point, dancing with my wife at the time, I nudged her and motioned with my head to look at Hayden and Inge. They were dancing and holding each other in a way that was a perfect illustrations of love, the epitome of innocence and tenderness.  Such a tragic loss. If you don't know about these two and their incredible lives, you would do well by yourself to find out who they were.

Well, Inge participated in the deepwater solo competition that was put on this past summer at the lake, on-sighting this route along the way to her victory. You can see a wonderful film about the event here;

From the conversations I've had with local folks who organized and participated in the event, Inge made a huge impression on the Fayetteville climbing community with her kind, wise and gentle nature, as well as her tenacity and undeniable climbing ability. When I decided to shoe up for this thing at the end of a long day, it was to try and honor and live up to the legacy that she and Hayden left for us. At every point on the route's semi-desperate stemming that I wanted to take or let go, I kept moving because I could recall Inge being on this route, taking it to the chains. As I made the final amazing moves out the roof to the anchor, I almost cried.

I knew Hayden far better than I did Inge. However, they were undoubtedly two of a kind. It meant a great deal to me to channel Hayden's laid-back approach with Inge's never-give-in attitude to send this thing first go. They were two Bodhisattvas, sent here to show us the way. Their lights burned fast and bright, and like the rays of those distant burned out stars in the night sky, it will take many years before the light fades...

Tips crack in a left facing corner just above the water line. It's front and center to the climber's right of the "slab" approach, just before you round the corner to the "Movie Screen". Once you see it it's unmistakable.

I started with the two bolts of the neighboring sport climb, then used quadruples in the blue TCU/red c3 range, as well as a couple of medium stoppers. You'll also need a few less-than-tips pieces and a finger-sized cam or two to protect the final moves to the anchor. Nothing bigger than a .5 BD is needed. 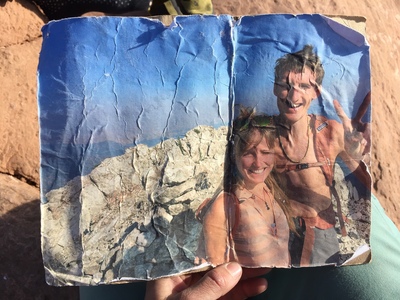