Starting under the first flight of stairs at the bottom floor of Rubidoux, climb under the staircases all the way up. The sides of the stairs are on, along with the stairs themselves, the bars are not until you get to the anchors, including feet.

Be prepared for slippery jug holds for the staircases (bring chalk if you're lame).

Go to the back door of Rubidoux, the one facing the fieldhouse. Head left once you get in the door, and take the door on the left that leads to the stairs. The anchor is on the 3rd floor (4th including the basement floor), and the climber begins climbing on the lowest level of Rub.

These are all on the third floor, back stairwell at Rubidoux. The main anchor point, is the beam that is closest to the door near the stairwell, use common sense and only actually weight this part of your anchor. It's best to belay from above. A number 5 cam actually fits bomber in between the vent and the brick wall, still don't weight it, haha. Also a number 1 nut/stopper is necessary for the anchor, because it's hilarious. DO NOT WEIGHT THIS PLACEMENT. Overall, if you equalize your anchor to just mainly using that beam, you're golden. P.S. a spotter is helpful to watch out for RAs.

The beam has the blue webbing on it, use this a… 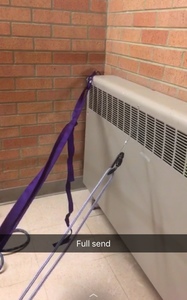 The pointless anchor points. I am just stoked o… 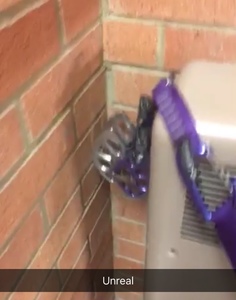 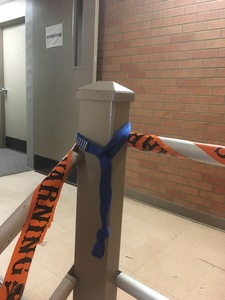 This is the beam you should use as your main an…