Near the far west end of the West End Wall, this long, all gear line offers a nice mix of styles on excellent gray basalt which has been scrubbed and swiffered into submission for your climbing pleasure.

The first 20' ascend the steepest terrain on the route, with a mix of discontinuous crack and face features and plenty of stemming. The gear through this section is a little fiddly, but certainly adequate if you take the time. A shelf marks the rollover onto slabbier terrain with left-leaning twin cracks leading to a stance. Above the stance, work up a wide stembox, using the dual thin cracks on either side for progress and protection; there are some interesting maneuvers throughout the box, which will be harder for shorter folks. At the end of the stembox, enter a short flare and pull over a slight bulge using some pockets and a good sloping rail. Finish up a handcrack with jugs.

The name is a reference to a Gregory Alan Isakov song, not the band by the same name.

Close to the west end of the West End Wall. Rap skier's left (west) of a juniper on the rim that has some trimmed branches to permit the topout; this sits in a slight depression/trough in the clifftop. You can rap off of another juniper (larger) or a mid-size ponderosa, both of which sit about 10-15' back and west of the trimmed juniper.

The lower belay is on a small block shelf that has been excavated out of the blocky choss with a 2 bolt belay. 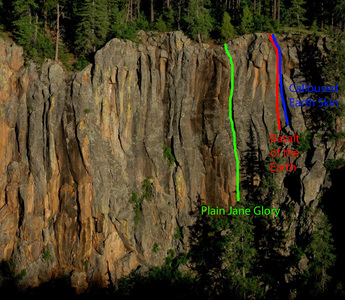