Pitch 1: From the starting ledge, mosey up a grungy dark-red gully and make an awkward mud mantel (place that 5" or 6" cam here!) to reach the next ledge. Move up through the next chimney section, which thankfully has much better rock quality and some fun moves at the top. Finally you'll shimmy up yet another cavernous chimney - this is the north edge (analogue crack, so to speak) of the deep cleft that forms the 3rd pitch of the Northeast Face route. The belay from the top of the pillar takes all sizes of gear. (5.8 PG-13, 150 feet)

Pitch 2: Joins the Northeast Face route for the summit block hop. Climb the final Coconino headwall via a series of blocky handcracks. (5.8, 50 feet)

Descent: Two-bolt chain anchor located on a bench on the north side of the tower, about 25 feet below the summit. Second rappel from slung tree (new cordalette as of 10/2017) deposits you at base of route.

Because the starting ledge also serves as the base of the second rappel, this route can be done pretty quickly "on the way down" from the Northeast Face route.

Single rack to 5"
6" piece useful
Be warned that the majority of this route travels chimneys with sparse pro. The age-old question: do squeeze chimneys count as runouts? You decide! 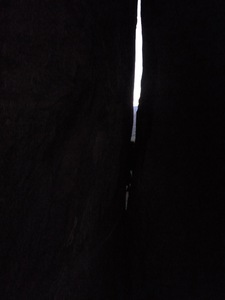 Deeeeepthroat. If you look carefully you can se… 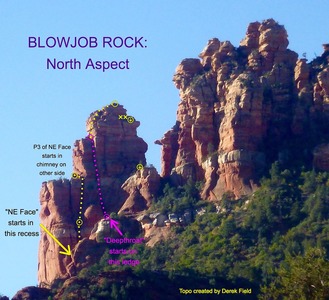 Phototopo for route identification on the north…