Routes in Atlantis South Side

The Trident is a 3-pitch route which tops out on the main tower that's closest to the parking area for Atlantis. Climbs like a Sedona spire but without the long approach!

It's a great moderate outing on its own and it also offers climb-in access to the upper tower routes and the New England wall, allowing for some rad link-ups!

Pitch 1. Starts on Mondo Freako (FA: Chad Cooper, 1994). Climb past the Mondo Freako anchors to a chain anchor about 25ft higher. Belay is in an alcove with a bush visible from the ground. (5.7, 65ft)

Move belay up to the bottom of the final pitch following the established path on the ledge.

Pitch 3. Spot the leader to a high first bolt, crux is to the first bolt. Exposed. Gets gradually easier. (5.9, 80ft)

OR . . . The adventure continues with Poseidon's Throne for a super rad linkup!

Hints for a successful rappel: Rap 1: rope is easier to pull the farther you are from the wall. Very easy from the top of the P2 tower. Rap 2: throw the rope out to the climber's right. Chains on P1 are slightly climber's right of the chains on P2. Rap 3. Watch for pebbles dislodged with your rope when you're pulling.

Walkoff Description: From the top of the tower head South toward the higher tower. Follow trail to the left along the base of this cliff following well worn route down short boulders and through bushes until you reach the big rockslide. Head down the rockslide then follow cairns down to the creekbed. If linking with the routes on the New England Wall, head uphill at the rockslide and follow cairns.

*This route is designed to be topped-out and rapped or walked off. If you try to TR from the P3 anchors, you may wear the sheath on your rope unnecessarily.

** Helmets! Although we've been over it all with a hammer and crowbar, there may still be some loose rock. Please test holds and be aware for the safety of other climbers in the area especially below.

From the Atlantis Parking lot the upper half of the route is plainly and resplendently in view. Head down the trail to the creekbed. Instead of heading left into the slot canyon, cross the creekbed and up to the base of the slab with the twin 40ft 5.7s. (approach is 10 minutes max) Start on the left one, Mondo Freako. Theoretically you could start on the one on the right but we haven't cleaned above that so don't climb it unless you're prepared for loose conditions.

P1: 5 draws plus your anchor gear. The final 25 feet is 5.easy so we didn't waste bolts. If you're scared, bring a set of stoppers and an extra draw.

P3: 4 draws, again a set of stoppers and an extra draw or two if the 5.easy runout on top scares you. 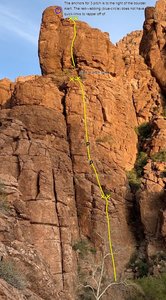 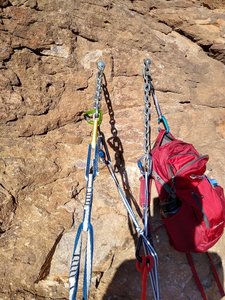 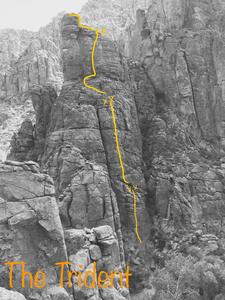 The Trident viewed from about halfway down the… 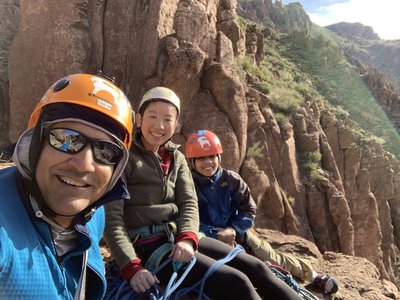 Happy people climb! On top of the Trident! 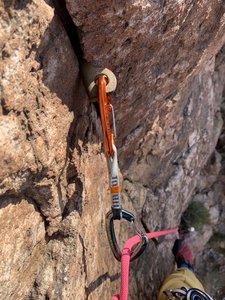 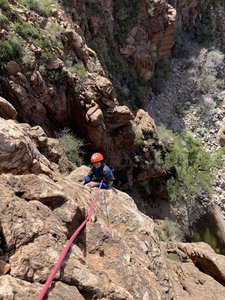 Neil comes up to pitch two 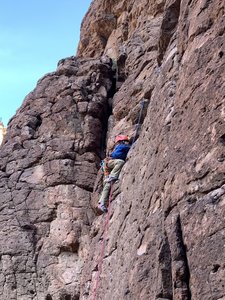 Neil on pitch one. 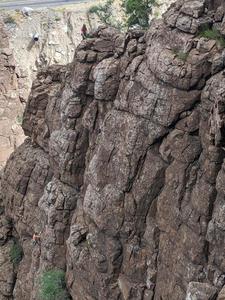 Katie making her way up the second pitch of the… 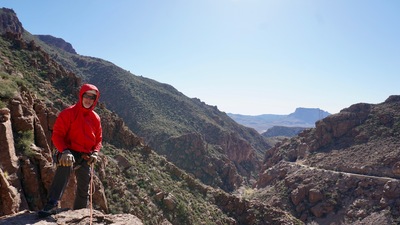 The view from the top! 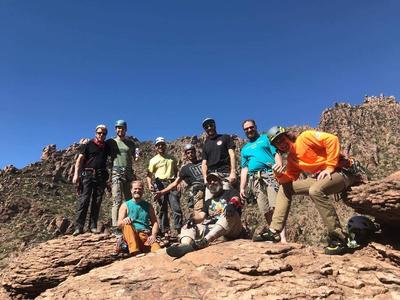 The group who climbed the Trident on opening da… 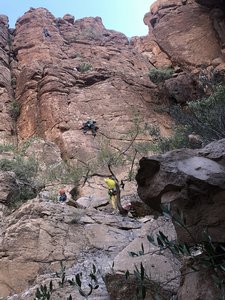 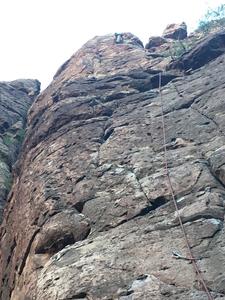 More About The Trident