Forged In The Flames

Distinguished by three distinct sections separated by bulges, as well as having a bit of an adventurous feel from losing sight of the belayer early on, this route is a solid addition to an already great wall. Start up a shallow dihedral to a rest under a major bulge, then fire through the bulge to a slightly slabby section. Follow this section into a few small bulges and a corner that eventually rounds off to the anchors on a ledge.

Typical jungle cliff new route warning: jungle cliff can be pretty dirty/dusty, especially the new routes. Accordingly, I have put over 6 hours in just cleaning/scrubbing this route, and others have put in several hours as well. However, it is still dirty, expect this. But at the same time, this route is really fun so don't let a little dirt scare you off!

Also, in the process of cleaning this route I fell off the end of my fixed line and had to go to the hospital to get 27 stitches. Don't let my suffering be for nothing!

This route was named after a great Earth Crisis song, and was FA-ed in the smoke of the Eagle Creek fire. Get it?! Climb this route after Firestorm (another Earth Crisis song from the same record) and you may just become straight edge
youtube.com/watch?v=-c1aXBm…

This route lives just to the right of Ecocide, in front of a small tree/large bush and a large rock shaped like a blade.

12 bolts to a two bolt anchor with chains and winch hooks. All bolts are 1/2" and stainless steel, and the first five have fixed draws for ease of cleaning. Note that the opening to the winch hooks are not super large, so getting a rope over 10.5mm into them may be a tight squeeze. 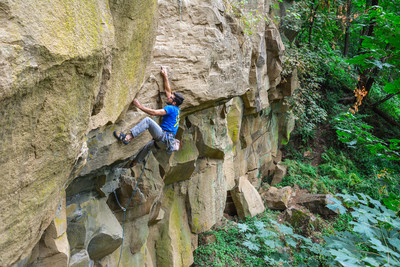 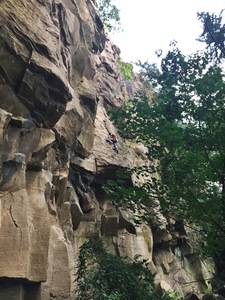 Charlie Egan getting a rest on the slightly sla… 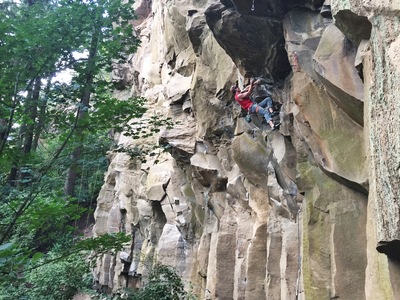 More About Forged In The Flames