This mega-classic testpiece route rounds out what I consider to be the Arapiles slab trifecta (including Brolga and Auto Da Fe). It should be a must-do for any Arapiles hard-person but should not be taken lightly as the climbing is committing and difficult, and the pro isn't always where you want it or as good as you'd like it. A tip of the hat to stonemaster Tobin Sorenson, who supposedly climbed this thing ground up and onsight for the FA - without sticky rubber, banging in the pins on lead, and then grading it a lowly 23 - or so the story goes. Nowadays the route gets solid 25 (5.12a/b) and some say it may be even harder!

Before even hiking up there, check the forecast. You want cold temps and/or shade as this wall is a solar collector. When we were trying it, my partners and I would go up at 6 AM and draw straws to see who got to climb first... Once the sun hit around 7:30 conditions were shot!

Begin slightly left of center on the Tjuringa Wall - a beautiful, undulating expanse of rock that evokes the memory of prehistoric oceans lapping the rock and polishing it to a mirror-smooth finish. The wall is capped by a massive roof which, yes, you get to breach on the second pitch.

A railroad spike hammered into a horizontal 20' off the deck marks the start.

P1 (100', 25): Climb up a flake (optional pro) and make a committing stand-up move to the base of the slab. Some great sections of climbing with good gear leads to a shake at a horizontal fingerlock. Pop in a cam or two, clear you mind, and focus on the crux climbing - there can be no distractions! Amazing movement on pure slopers with the pro well below your feet leads to an insecure stance. Tiptoe left to a flake where you'll find complete recovery and more pro. Really take your time here cuz this gear is crucial to preventing a ground fall from 60' and the second technical crux and the true psychological crux of the route are yet to come. Above the flake, insecure slopers eventually lead to a mail slot. After a brief prayer of thanks, continue to the massive roof where some kinda shaky chockstones are slung as an anchor. But you won't use these because you're continuing on to the second pitch! Plug in some pro and initiate a cramped grovel straight right for 50', finally stepping down to a bolted anchor. This horizontal slither may be the true crux of the route!

P2: (100', 25): After the laughter subsides from watching your partner follow this crazy pitch, put your game face back on: Climb up and clip a carrot (bolt plate required) above the belay that belongs to an abandoned project. From here we were able to clip two green Aliens that we had pre-placed side-by-side in a devious slot up in the roof, but you should note that placing these on lead would probably be impossible. We felt the pre-placement necessary to prevent a bone-breaking fall back into the slab below. If you're more bold, you could skip these pieces - it is possible to wiggle in a tiny nut (I used a #2 BD Stopper) in a dubious block that is split in half and crumbling but somehow still wedged in the roof. Commit to the horizontal plane and begin hand traversing out the roof on relatively good holds. About two thirds of the way out clip a bolt*, continue to the lip, and execute a tough mantle to get established on the face above. From here, wander mostly up and left (when in doubt, go left) to a small alcove. Belay, or, if rope drag isn't too bad, continue to the top of the wall.

(*) This bolt was formerly a pin from the 1970's, but when we were climbing the route we pulled it out under body weight. Both the pin and the rock around it crumbled leaving no other placements for either a replacement pin or removable pro. After careful consideration and conversation with several locals spanning multiple generations of climbing, we elected to install a bolt as close to the original pin placement as possible. Assuming that when Sorenson climbed this route the pin was reliable, our decision was to restore what would otherwise be a death route back to it's original form (one that is merely very, very spicy). 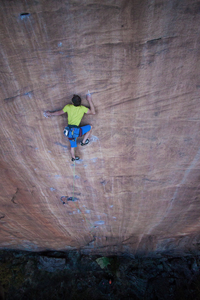 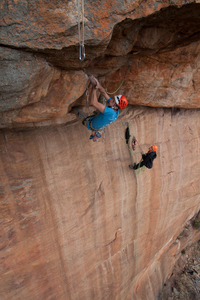 Adam Demmert crushes the second pitch while Ala…