This long crack system cleaves through a nice panel of orange stone amidst the somewhat jumbled "no man's land" between the Memorial and West End Walls. It offers up a lot of mileage with good variety of movement with an emphasis on handjams. I did a lot of trundling and cleaning on this thing, but there are several chockstones and welded flakes/blocks that one must pass is a couple sections. Everything that remains has held strong against much prying and hammering. For those comfortable with a bit of blocky rock (think Waterfall), this is a great route for the grade!

The line starts from very near the bottom of the cliff, on a small, triangular stance about 10' up, just right of the crack system. The belay takes red C3 sized gear.

Weave up splitter hands through big blocks. Place some deep pro (sling long) at the base of a right-leaning, bulging slot and surmount this staying on the outside of the slot utilizing some handy jug rails. Hands, fingers, and face holds lead to a panel of hollow flakes to the right of the crack (all pried on). Shortly above is the distinct crux of the route, where the crack pinches out, necessitating a big move or some mega stemming/shenanigans to hit a fingerlock and tight hands above to the top of the pillar. Atop the pillar, the rock becomes the cinder-coated variety that is common on most Memorial Wall topouts (Sindarete). Dance around a big block perched on the ledge, and head up steep hands/cups to a final, steep, left-facing corner. Jam up the good crack in the corner and the flake on the right wall, until you pull right onto the apex of this flake, which is very thin, but again held up against the prybar. From the tombstone flake, the route culminates in a wild exit on steep cinder blobs and jugs.

Named after my trusty piton hammer (inherited from my father and having served me for 15 years) became unclipped and plunged into the canyon, breaking the wooden handle.

From the parking by the Hobel memorial, head down the rim (west). There is a giant, dead ponderosa near the parking, then another giant, live ponderosa a short ways west, then two mid-size ponderosas in a row. Rap off of a small (5" diameter) pine a bit past these, or run the rope back to bigger trees behind the small one. The topout is on a highpoint, just before the rim dips down in a trough. 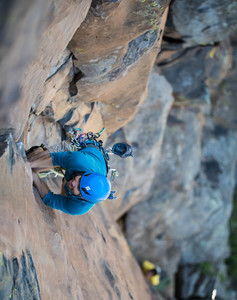 Trevor Bowman on his route Drop the Hammer. 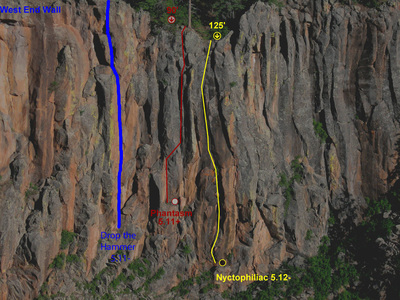 More About Drop the Hammer