Routes in 6. The Middle Ages

An arbalest was a variation of heavy crossbow, which was a weapon commonly used throughout the Middle Ages. It was essentially a compact, single-operator version of the much older ballista, a siege weapon sometimes called a "bolt thrower". Arbalest was also apparently sometimes used to refer to a crossbowman. Since I'm a contemporary bolt-throwing Bowman (sometimes cross), I liked the name. Thank you Wikipedia!

As for the climb, it tackles the black, water-stained, left-facing dihedral immediately left of Bertilak's pillar. Rap off assorted small junipers/pines to a small foot-ledge atop a large hollow block and a 2 bolt anchor. The lower corner is somewhat awkward with some devious, spaced gear, but is relatively mellow (5.9/10- ish).

From a small shelf, the climbing gets much better and more engaging as you launch up the steeper crux corner past 2 bolts and some small gear. This stretch really favors taller climbers, as there is some reach between the sparse features that allow it to go at the grade; however, it is mostly stemming, and should still manageable at a higher difficulty for shorties. The rock is stellar.

Use Darren's directions to locate the top of Bertilak. Arbalest is in the black corner immediately climber's left (west). 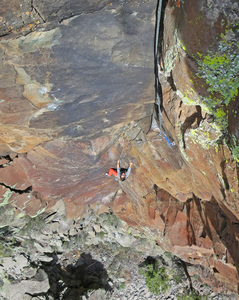 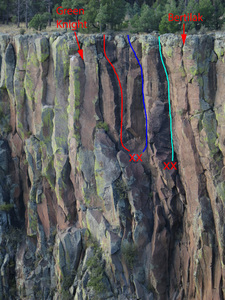