Where You Fall, Direct

A short, but worthy problem. I'm sure it's been done before (like everything in the park), but it's not in any guidebook, and I've never seen somebody do it.

Take the direct-line up, through the crux-section of the Rat Rock Traverse, between two cracks. Top off at the height of the land. Both cracks, and the large holds in the crack beneath the capstone-rocks to the left and right, are off.

A few variations may be had, and probably more could be found.

- V2: Eliminate the key "triangle"-crimp towards the top, which typically forms a crux hold for the Rat Rock Traverse. Very cool crux grab for the lip, done in this way. Rated V2, since it feels harder than "Mother's Milk" on the east face, and probably about as hard as "Tweaky Shit" (possibly a bit harder).

- V0+: Use the massive holds in the crack at the top, right of the proper topout. Probably about as hard as the overhang problem near the start of the Polish Traverse, so I gave it the same grade.

You know that place where everybody falls off the Rat Rock Traverse? This problem is named as it is, for a reason.

No pad or spotter needed. 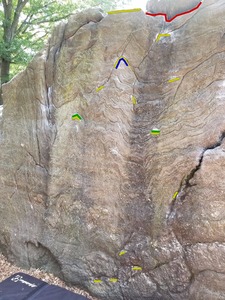 Start on green holds, yellow holds are what I u… 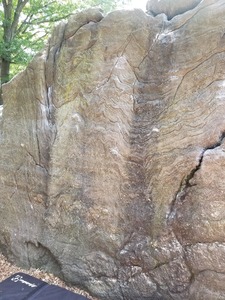 Go direct, between the cracks.

More About Where You Fall, Direct