This is the original start to what everyone now climbs as Six to Eleven.

Start on the trail immediately south of the buttress. Scramble up through the scrub oak, avoiding scratches, punctures, etc.

Once you reach the steeper stuff start up a bit to the left of center and get to the high first bolt. There is one more bolt in the next 50 feet or so.

(Of course, if you're not crazy — which is debatable since you're on the original variation in the first place — you'll clip the last bolt on the start of Six to Eleven with a sling.)

Once you get to the midpoint anchors the fun begins. Up you go on mostly enormous jugs until you step left to surmount the actual roof. A bit of trickery with crimps and balance leads you to the last 15 foot headwall and the chains.

This appears in the Ruckman guide as 5.11b/c. It probably is that if you stay directly on the bolt line, but since everyone (including me) uses the big holds, it's not nearly that hard.

Really, you're better off climbing Six to Eleven.

The obvious, overhanging roofy bit that is to the west of the alcove containing Rockapella.

The start is on the trail directly south.

You may have to squint a bit to see the first bolt.

Two bolts in the first 70 feet or so. Plus the last bolt from Six to Eleven unless you're crazy.

Seven more bolts (including the midpoint anchor) plus chains. 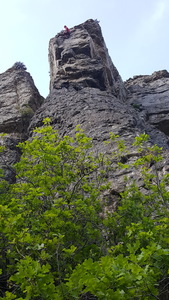 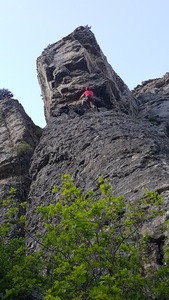 This is the start of the 2nd pitch. It's all bu… 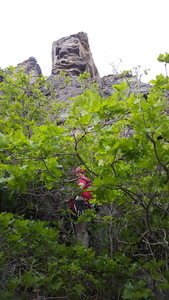 More About Eight to Eleven