Routes in I. Washington Column

The Direct Route on Washington Column is an old classic climb that used to extremely popular until it became forgotten as more (better) climbs became discovered. The first half climbs the original route to Lunch Ledge which was the first technical climbing route done in the Valley by legends Harvey Voge, Richard Leonard, Jules Eichorn and Bestor Robinson in 1933. The Direct Route continues up from Lunch Ledge to the summit via chimneys.

It doesn't ring true anymore but Roper summed it up in the old 1971 Green Valley Guide by saying, "Although not terribly enjoyable or aesthetic, this route is probably done by most climbers who stay in the Valley for any length of time." Not as clean or classic as the Royal Arches, the Direct Route is a step up in difficulty but is fun enough with cool history that it deserves to be done at least once in every Yosemite climber's tenure. If nothing else it's a great moderate adventure climb to pass a day in the shade for most of the route if starting early.

NOTE: This description assumes you are climbing with a 70m rope and dont mind a few short simul climbing sections off the anchors. Otherwise it's very easy to belay almost anywhere if using a 60m.

There are many fixed pins on this route, which doesn't always mean you are ON route, but generally, if you see them, you're going the right way.

P.1 (5.7) Off the belay, down climb about 25 ft. until able to start moving up the obvious corner right, past a bush, to a small ledge with an old tat anchor. From the anchor, cross around right into 5.7 face on gritty rock passing a tree to the left and up the corner past another old bolt anchor. Make sure to resist cutting too far right. Continue straight up and eventually trend right up small ledges passing a final third bolt anchor to belay on a ledge at a huge pine tree. 230 ft.

P.2 (5.9) At the tree is the base of a short 5.9 corner. Climb up about 30 ft until able to cut out left on the face to get into an easier corner, following many fixed pins, up and right until you reach a nice ledge with a big pine tree and a distinct tree with three trunks. 220 ft.

P.3 (5.8) From the ledge, climb up a small boulder and continue straight up easy climbing past more trees and pins until reaching a small ledge with a fixed pin on the wall. A short 5.7 "mantel" move left with a high step onto the next ledge and then traverse past an old bolted anchor to the base of the Reigelhuth "Chimney" with a bolt about 10ft. up. More of a hand crack than chimney, one wide move leads to easier climbing up to Lunch Ledge. As one of the most famous ledges in the Valley, it's quite underwhelming. 240 ft. with some simul climbing off the anchor. If using a 60m belay at the bolt anchor below the Reigelhuth Chimney.

P.4 (5.8) From Lunch Ledge you choose to either climb the "Fat Man Chimney" or the "Charlie Brown Chimney". Fat Man is easier with better protection and fixed pins while Charlie Brown is harder and more run out. Charlie Brown will lure you from Lunch Ledge with a deceptively easy and cleaner beginning to the right but don't be tempted! (Unless you're psyched) For Fat Man, continue straight up passing a small tree to the left and up crumbly 5.7 face along the corner that turns into the Fat Man Chimney. Pass two old bolts and pins until continuing up a hand crack after the chimney up and right, passing a tree, to the anchor. 215 ft.

P.5 (5.9) From the anchor climb up and right around the arete over a small step to easy 5.6 face reaching a short 5.9 insecure corner section. At the top walk up sandy ledges for 100 ft. until reaching a ledge with a huge tree at the base of the Great Chimney. 200 ft. Also possible to continue 25 ft higher to the actual base of the chimney and link both chimney pitches into one with a 70m rope.

P.6 (5.8) Start off with old school 5.8 wide chimney moves past a piton. Climb over 3 large chock stones until reaching the usual midway belay ledge with bushes. If using a 60m stop here and belay. Otherwise, continue up past pins to another large chock stone and up until reaching a ledge with a huge pine tree. 250 ft from lower tree belay, 220 ft. from base of chimney.

P.7 (5.7) Climb up an easy chimney section to another small ledge. Instead of continuing straight up to harder climbing cut left behing the big corner to easier climbing. Continue up until eventually tunneling under a huge car sized boulder and up to the belay ledges. 200 ft.

P.8 (5.10a or 5.9 var.) From here there are a lot of options and it is confusing to find anything familiar. Stay left and up for easy scrambling exit pitches or move the belay up and over right for about 200 ft. until at the base of a corner with a large white flake on the ground. From the flake, climb up a glory 2" hand crack to a small roof. At the roof cut right on a 5.7 hand traverse to either continue right and up on the variation (slightly easier) or back up and left of the roof to a midway belay ledge with a tree. If using a 60m belay here. Continue up the 5.9 corner with quickly degrading rock to one last 5.10a move from under the roof and up onto the summit slab.

From the summit continue up sandy slopes to the summit of the Column and take the North Dome Descent Gully down. 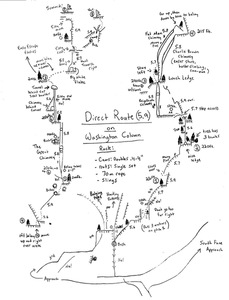 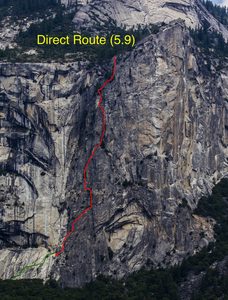