If you only do one route in Battert, this should be it. It's fairly easy, the most photogenic by far and just plain fun.

From the start, it isn't immediately clear you're climbing a tower. Once you get to the belay, i.e. sitting on top of the little tower it is. The top of the tower is just big enough for 2 people, pretty tight for 3.

The crux is stepping off the tower onto the wall. It's not as bad as it first looks but always inspires fear, even after a few times. Think of that scene from Indiana Jones where he steps out onto the invisible bridge.

Get one foot over (there's a nice little ledge for one foot) and then put some pro in while you still have one foot on the tower. A small cam is best, then a nut.

You can then get another cam in fast which is recommended. Then you've got to do a bit of searching for holds until the one and only bolt, after which it's then jugs.

Each belay has a single large ring bolt to use. Otherwise the first pitch is 100% trad, the second pitch has a shiney new titanium glue-in about 2 meters after the start. But that's it.

Pitch 2: the belayer must use a munter (off the anchor) because of the direction and tubers etc. not working super great. Don't belay off your body.

After putting one foot on the main wall, having the other still on the tower, you can get a yellow mastercam in the crack and and/or a small nut. Place them first before bringing your second foot over. Jesus nut! 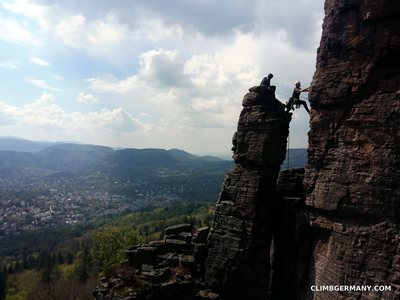 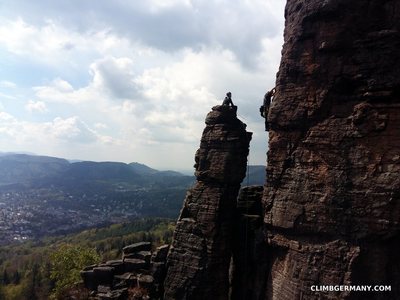 And he's over! After stepping across from t… 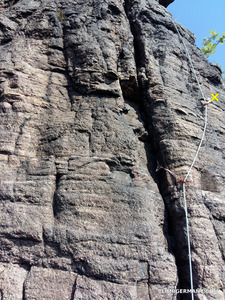 Another shot of pitch two, which is short. The… 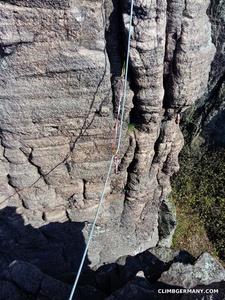 Begin of pitch 2. Place your pro while still ha… 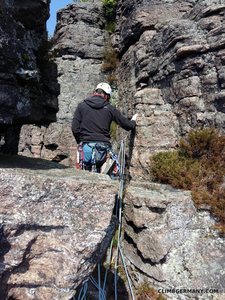 Belay station at the top of pitch 2. Better to… 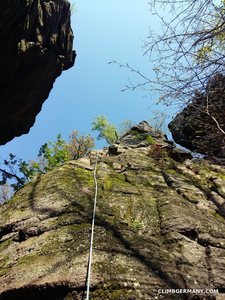