This is the first route that was climbed at the imposing North face of Las Ventanas. Although it was re-equipped with bolts, there are very few (except for the crux pitch) and most of them are not in great shape, so taking a fall is strongly discouraged. Nevertheless, the climbing is easy and very adventurous, thus its classic status.

P1) Climb up the left side of the gully, clipping two bolts before traversing right to a small ledge in a chimney. Clip another bolt and exit the chimney by going left at the chockstone. Reach a nice ledge with bolted anchors (5.7, 30m).

P2) Continue up the gully, finding the easiest path along the slab, till you reach a giant ledge with another set of anchors (5.6, 25m).

P3) Climb to a small alcove, then traverse right to clip a bolt and continue traversing right on easy but exposed terrain. Go around the corner, slinging a big rock for protection. Reach a small alcove with a semi-hanging belay (5.5, 20m).

P4) The money pitch! Go straight up a very steep gully, using big jugs to make progress and clipping bolts along the way, until you reach a good ledge/alcove with bolted anchors (5.8, 30m). In certain times of the year, there can be eagles nesting only a few meters away from the route, so be careful of not making too much noise if you encounter them.

P5) Climb out of the alcove, trending right till you reach a ridge. Follow it towards the summit, until you find another bolted anchor on the left side of the rigdeline, only a few feet below the summit (5.4, 30m).

DESCENT: From the summit, scramble in Southeast direction, following the ridgeline towards a notch in between Las Ventanas main summit and its Eastern summit, you'll find a couple of sturdy steel stakes, from where you can make a short (8 meters) rappel to the notch. Once at the notch, follow the trail on the South side of the formation, heading Northwest towards the South face of Fistol del Diablo. Follow the widest trails you can find till you get into the gully on the South side of Fistol del Diablo, hike down the gully till you reach the valley floor.

The route begins on the left side of the North face. There's a trail that goes up and left to a little terrace with some dead trees. The starting gully is hard to miss, since it has the cleanest rock in the lower part of the wall.

10 alpine draws and a couple of long runners. Some medium nuts and a single set of Camalots from #1 to #4 can be helpful to protect pin scars or the occasional crack, but not mandatory. 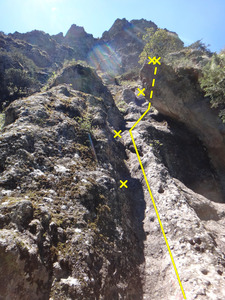 The start gully of the Direct Route on Las Vent… 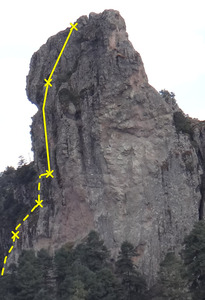 The Direct Route on the North face of Las Venta… 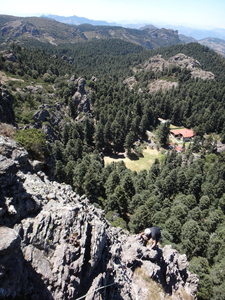 Mauricio Gonzalez on the final ridgeline toward… 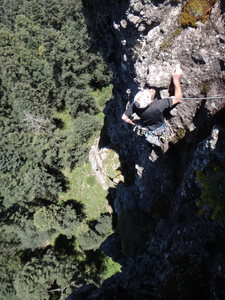 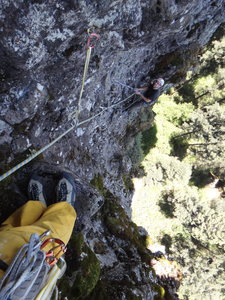 Looking down to the belay atop pitch 3, a few m… 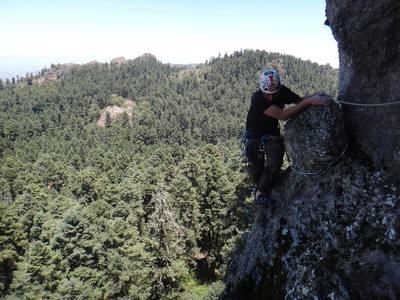 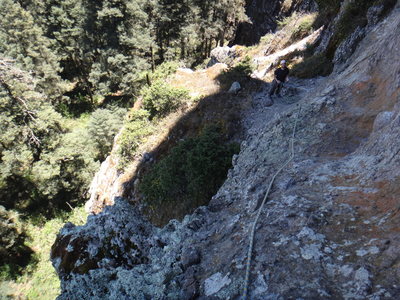 Looking back to the big ledge atop pitch 2, bef…