Bad Hombres climbs the narrow snow and ice gully that splits the right flank of the Bastille Buttress. A worthwhile romp if you can catch it in the right conditions, which can prove tricky given its low elevation and eastern sun exposure. We probably missed ideal conditions by a week or two in mid April after the biggest snow year on record in the Sierra Nevada. I’d guess March is probably a better month for this line most years. Scope the route from the Whitney Portal Road where it crosses Lone Pine Creek and watch the forecasted temps. Climb early, climb fast, and respect the desert alpine!

The route consists of mostly 40-65 degree snow (hero neve, as we found it) separated by some pitches of more technical terrain. A long steep snow and ice (WI2) ramp leads to the first constriction and crux: a verglassed bombay chimney-to-fist crack with a thin ice flow on the right side (M4; the thin ribbon itself may be fully climbable in the right conditions). Another snow ramp separates it from two pitches of moderate but thin ice above (WI3 + M2). The final steep snow gully is quite long and leads to two pitches of slabby, mixed rock and snow (5.5 - M2ish) which head up and left to the summit of the Bastille Buttress. The rock walls on the side of the gully take decent gear for most of the route.

We descended the lower portion of LPP's north ridge using a combination of downclimbing and rappelling from trees. Winter conditions can make this descent as exciting as the climb itself. Come prepared with some bail slings and plan to carry everything up and over with you. Alternatively, one may continue up the ridge to the "standard" Bastille Buttress descent gully, but take caution - that gully can be avalanche prone in winter. 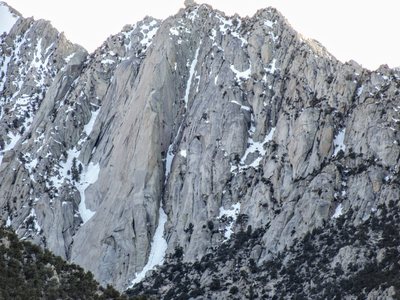 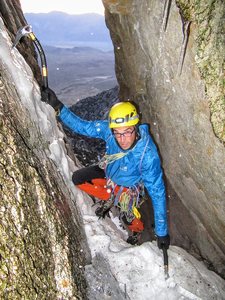 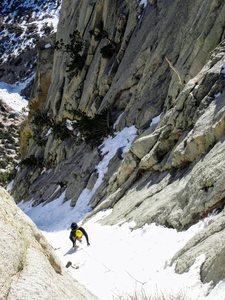 MM racing the sun In the upper snow gully. Abov… 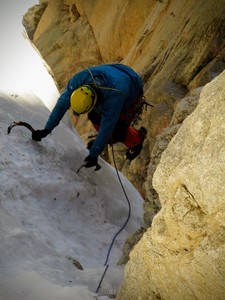 Myles Moser on one of the mid-route ice pitches 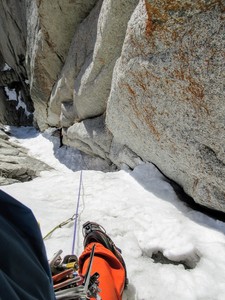 Looking down one of the sun-rotten ice pitches… 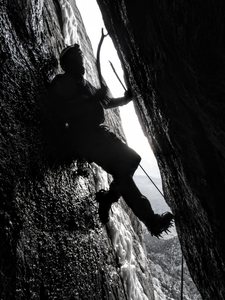 Myles Moser leading the crux mixed chimney on B…