I submitted this route because I haven't seen it in on MP and couldn't find info about whether a 60m rope would work and the state of the anchors, etc, so I climbed it with a 60m and found it was fine. However, both ends were in the air after getting down. I'd recommend tying knots and using a 70m. The anchors are new glue-ins as of April 2017 and looked bomber, but placed such that you have to do the final chimney moves before you can clip them. There are no intermediate bail bolts or anchors. Belaying from top isn't necessary. A belay from the ground will be pretty hard to get going at first, but fine after that. Helmets are NOT recommended because of the chimney at the top, but wearing a helmet on the ground is HIGHLY recommended. Most holds are solid, but I did dislodge some during my ascent. Since the base is usually pretty crowded with sport climbers, you'd want to make sure you yell very loudly if you do dislodge anything.

The climbing is steep, varied, and burly. There are also at least two sit down ledges and a few no hands rests followed by more strenuous climbing. I'd say the beginning 1/3 is probably the hardest technically. The middle 1/3 is more endurancy with a nice long section of jug hauling but sparse gear, and the final 1/3 is unremarkable except for the nasty chimney.

The top of the chimney was slimy and wet making it more exciting, but it is only about two body lengths. It was tight for me and it flares outwards a bit. The walls of the chimney are pretty smooth and not many edges could be found to make the struggle for upward progress easier. Bomber keyhole slot for a medium or large nut in the chimney just before the anchors protects the exit from the chimney.

Bolted anchors at the top, 60m rope to lower off (tie knots), but 70m will be extra safe.

Gear obviously subjective, but I found my double rack had quite a few extra cams left (and I had doubled up in certain places). Two #5 would have been nice, one was okay, and made it work. One #6 was needed to protect the traverse out of the cave near the start. No big gear is needed for the chimney. Offset nuts were useful.

Lots of long slings and runners. 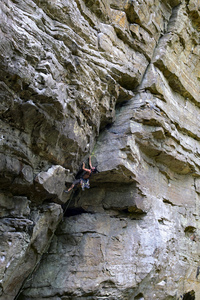 Mike on the sharp end 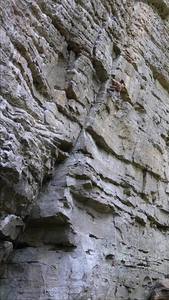 First attempt. About to take a big fall.