The Bügeleisen is a classic "plaisir" multi pitch route on good granite with great position in a stunning location. As such, it’s a popular venue with especially guided groups which take advantage of the nearby hut.

14 or 15 pitches, some long enough to gobble up most of a 50m rope. The route feels fairly consistent from pitch-to-pitch with the easier pitches up high.

For fit climbers comfortable at the grade, plan on 3-4 hours for the ascent, and, half that for the descent (barring any “issues”). While there’s a fair amount of fixed protection sprinkled along the route, in the form of bolts and a few fixed pins, there’s some distance between protection points at times. Run outs on the easier sections are to be expected.

If considering the route car-to-car, take into account that the guided groups start early from the hut. Be prepared to have company. The hut is a nice rest stop, up and down, with a quick cappuccino or Swiss beer depending on one’s proclivities.

Descent: The route is nearly reversed in its entirety excepting the last three pitches. From the top of the 2680m sub summit high point of the route, rappel back down the steep east face for 50m to a ledge, which is follow back north to the route. Walk and/or down climb the easy slab pitch to the anchor and rap rap rap back to the base. Count on getting your ropes stuck. A set of thicker double ropes might make the spaghetti snarl of lighter twins less a problem on the many rappels. Even so, plan on re-leading a pitch or two to retrieve the stuck cord.

Note: Versante Sud guidebook Solo Granito as well as the excellent Filidor guides Plaisir Selection and Plasir Sud have route descriptions and more detailed topos for this and many other nearby routes.

This is the obvious line right up the sharp-profiled north ridge of the formation. Approach most likely from the Sciora hut. Take the trail towards the Sasc Furä hut and the cut over to the glacier crossing in front of the steep east face. Cross the glacier (in early/mid and some late seasons crampons and an ice axe may be prudent). Note the large ledge at the base of the east face which wraps around to the north. Gain this ledge with a scramble up by traversing slightly to the right. Continue around towards the north ridge. A short up climb (easy fifth class) provides the final challenge. Follow the ledge around and where it peters out, the route starts.

Gear for the route should consider a set of quickdraws and alpine draws supplemented with a handful of medium size cams. Belay stations are bolted, some with single large rings. Consider that the route is popular and sharing belay stations with parties travelling back down the route, as well as faster parties going up, will most likely be a reality. 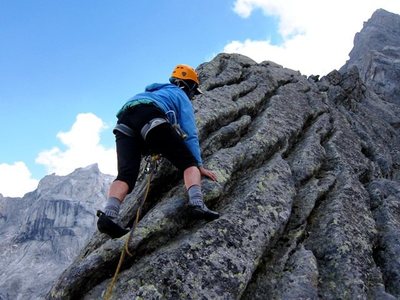 Carol Petrelli bringin' us home to the summ… 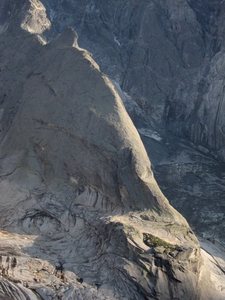 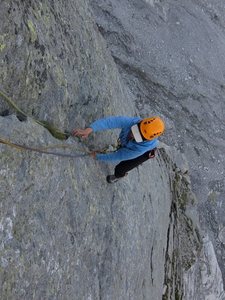 Carol coming up pitch 5 of Bügeleisen 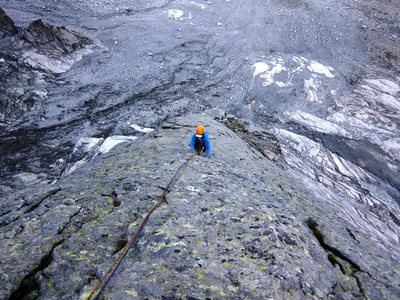 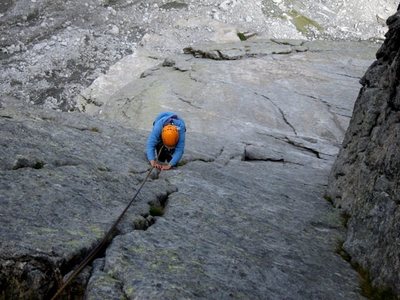 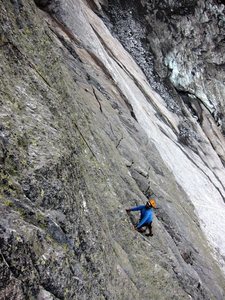 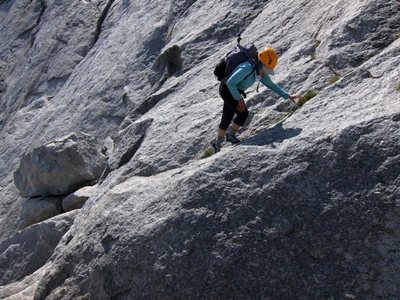 Ledge approach to start of the Flat Iron classi… 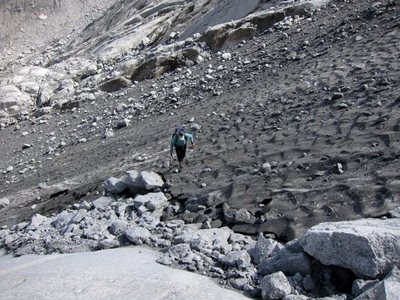 Approach across the glacier to Bügeleisen 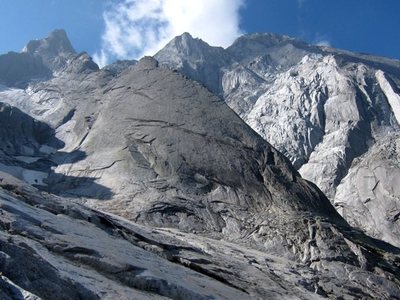 Big east face of the Bügeleisen.