Routes in b. Red Book Point

Interesting rock situations with fun scrambling sequences and some thoughtful navigation. But ...
one crux sequence much more difficult than the rest of the route which is not avoidable - (and another hard crux which is avoidable).

Fits well into a "grand traverse" of the Calico Ridges S to N.
Or into a less-long ridge traverse from the 2nd Pull-Out parking: first hike/scramble up to "South Pass", next traverse Red Book Point summit and ridges from S to N to reach "Middle Pass", then SSE Ridge + SSE Groove to Calico Peak, and descend SE Gully and back to 2PO parking.

Next work around and up (low class 5) left side to top of next peak. Down its N ridge toward a big tooth. The main route next goes around right side close under tooth and a short ways on the ridge to an eight-foot high rock. Up over the overhang (5.8 or 5.7), rather exposed to the left side, wish it were easier to find more positive holds just above
-> likely difficult to reverse the starting move if you then feel you need to give up half-way.
. . (Also if you think you might want to descend this same route, check out this move from below very carefully before executing, and perhaps rehearse it downward at least once -- or make sure you can find + navigate in reverse the variation below).

variation: That overhanging sequence can be avoided just before reaching the big tooth, by down-climbing into the obvious gully to its left, then down a bit more in that gully, then across the gully and up out its other (N) side (low class 5).

Finish roughly NorthWest with some navigation and scrambling (class 4 or 5) to reach the highest summit -> see Photo.

descent:
Reversing the first (unavoidable) crux sequence downward is likely more difficult than climbing up it. And reversing the second (avoidable) crux sequence is surely much more difficult than climbing up it. So if planning to reverse the route, make sure you check out (and rehearse?) key sequences in the downward direction. Also finding the top of the main gully is tricky (perhaps other key passages?), so make sure you know how you're going to find that (and other navigation) in the opposite direction.

So ... likely better to descend an easier route:
* If started from the west side of the Calicos, then (if your know it) it makes sense to take the "West side" route in reverse.
. . . Or the Walrus Gully route, if can find the top.
* If started from the east side, the "SouthEast gully+face" route has no single difficult sequence, but the navigation near the summit could be tricky, with some sustained class 4 or low class 5 sections - (likely not a good idea for someone who is not well-practiced in down-climbing).
* The "North gully+ridge" route has easier navigation, but the gully section is more difficult and likely more scary in the downward direction than going up it
. . . . (and we have not checked it the bottom of this route by Middle Pass is reachable from the west side).
. . . . (and getting down from Middle Pass on the east side, finding the correct gully is not trivial, and getting into the wrong slot canyon could lead to trouble).

warning: Many loose rocks and weak breakable hand- and foot-holds on and around this route - (even when the rock plenty dry). The rock becomes especially weak for a couple of days after significant rain or snow, so holds are even more likely to break off.

Start from Stairmaster Pass (latitude longitude approx (N36.1534 W115.4323).-..(elevation 4225ft /1290m)
... (with an obvious slackline cable as of 2016) ...
which can be reached from:
* Second Pullout parking on Scenic Loop road (from west side of the Calicos).
* Assisi Rd or Sandstone Rd parking, via Calico Basin Rd (from east side).
* traverse of the Calico South Ridge (from south end of Calicos, reachable from either east or west side).

No fixed hardware for anchor or intermediate protection.

Protection for trad leading is unknown. 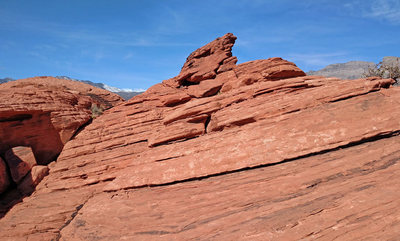