Access Issue: This area is designated as Charon Details

Currently the the US Fish and Wildlife Service is reviewing the Comprehensive Conservation Plan and reviewing activities for compatibility. Contact the Access Fund or the Wichita Mountains Climber's Coalition for more information on how you can get involved in keeping the tradition of climbing safe in the Wildlife Refuge. Use extra care to avoid doing anything to change the natural resources in any way.

Please do not litter and observe all regulations. We had to fight to regain access at one time, and we don't want to lose the privilege again. Local ethics and refuge regulations are that no bolting is permitted unless expressly authorized by the park. Leave the hammer and nails at home, no fixed gear please. Everything will go clean.

You’ll definitely feel like you went 15 rounds after an ascent of this steep and sustained splitter. Fistfighter climbs the continuous fist to offwidth crack in the corner just left of The Warm Up. The crux is a devious and powerful sequence of moves necessary to span a nearly body-length section of blankness above the obvious roof at 25’. Once past this initial challenge,the aspiring pugilist then faces thirty feet of unrelenting vertical to overhanging fist jams until the difficulty lets up just before the top.

Although he was certainly more well known for his sport climbing prowess in Arkansas and around his hometown of Tulsa, the inclusion of Chris Lenox as one of this route's first ascentionists offers proof that Lenox was much more than just a sport climber. Indeed, over the course of his relatively short climbing career he teamed with Eric Forney to make numerous ascents of difficult 5.11 and 5.12 trad routes at historic climbing areas like Yosemite; Paradise Forks, AZ; Devil's Tower; and Cathedral Ledge, NH. Lenox had an incredibly short temper and, for this reason, was shunned by many in the climbing community. As a veteran of several climbing trips with him, I can attest to his volatile personality. Some of his expletive-laden tantrums reached legendary status. However, despite how he often appeared on the surface, Lenox had a good heart and a vibrant sense of humor. He also possessed an incredible energy that could be infectious to those around him.

I'll never forget the time I spent several hours wwith Chris Lenox at the first belay of the mega-popular Nutcracker in Yosemite Valley. We had woken early that morning and raced up to the cliff, intending to cruise the four or five-pitch route in a couple of hours while retrieving one of my cams that my partner, another friend of ours, had been forced to leave in the fading light of the previous day. Unfortunately, we discovered to our chagrin that another party had beaten us to the base of the route and was halfway up the first pitch. We zipped up one of the several alternative starts.but narrowly failed to beat these two climbers to the good-sized belay ledge atop the first pitch.

Although the Nutcracker has variations for several of its pitches, above the first belay a single crack provided the only route of passage. Above this the crack split into left and right variations before pinching back down again on the third pitch. This third pitch was the location of my stuck cam. Chris and I were appalled to discover that the party in front of us was agonizingly slow and incredibly incompetent. The leader took seemingly forever to climb the next pitch and then, to make matters worse stopped to belay at a hanging stance in the middle of the pitch. We were forced to wait as the second painstakingly climbed up the crack and then we continued to wait as they clumsily reset their belay, since the two climbers were not swapping leads.

By this time several more climbers had appeared on the ledge. We watched as the leader struggled up the right hand variation to the second pitch before falling ten or fifteen feet onto his gear. After several more unsuccessful attempts, the leader apparently decided that the crack above was too hard for him and, instead of doing the sensible thing and rapping off so that others could climb the route, he shocked us by penduluming over to the left-hand crack to give this option a try. Now these climbers were taking up both cracks and their rope was a snarled spiderweb stretched across the cliff face.

At least ten or twelve climbers were now crowded together on the ledge watching this horror show unfold. Gradually, one by one they came to the realization that they weren't going anywhere anytime soon and rapped off the ledge to go climb something else. Chris and I were baking in the sun. Our early morning jaunt on what was supposed to be a "rest day" had turned into a scorching all-day affair. We had brought no water on the route and, slowly, we also came to the conclusion that the only way off was down.

However, there was just one thing and it was a big deal to me. I was damned if I was going to let those two idiots have my cam! My partner the previous day was relatively inexperienced and I knew it would take little skill to extricate the stuck cam. I had to make sure somebody other than the party in front of us got up there first. The best option, and our likely saving grace, was a team of two Korean climbers who, along with us and one other party, were the last remaining climbers on the ledge. Everyone else had bailed. These two Koreans were young and seemed incredibly gung-ho. They were bouncing all around and chomping at the bit. Above us the leader had set another hanging belay, this time in the left-hand crack. The second had started up the pitch and, as soon as he swung over to the left crack, the route to the top would be open for these two Koreans to shoot past the climbers who'd wasted most of our day.

Except now Chris and I encountered a problem. It appeared that the Korean climbers had also made up their minds to descend. Chris and I tried frantically to encourage them to continue on, attempting to lure them with the promise of my orange Metolius TCU stuck in the crack above. We discovered quickly that these guys spoke no English whatsoever. I repeatedly pointed to the cams on my rock and then up toward the cliff above us, but to no evail. Our pigeon-English was no help, either; these guys didn't seem to understand a single word of the English language. At one point I pointed to one of my cams and then pointed up saying "free gear." At this the Koreans immediately stopped everything they were doing and stood spellbound just staring at us. Then the one closest to me said "Free? Free gear?" Chris and I were ecstatic. We were nearly jumping up and down on the ledge, pointing up at the cliff yelling "Yes! Free gear! Up there! Free gear!" The Korean who had just spoken to me literally jumped across the ledge and started up the crack at breakneck speed while his partner frantically flaked out rope and put him on belay. Chris and I were doubled over laughing. The universal word "free", known to all people speaking all languages, had saved the day! Apparently, everyone in the world knew the meaning of the word "free".

The frustration of the day was gone and had been replaced with hopefulness and jubilation. All was right with the world. The Koreans would get my cam, saving it from the clutches of the evil bumblies who had threatened to steal it away for their selfish, plodding uses. Chris and I laughed our way down our rappel and then repeatedly collapsed into the grass in laughing fits as we stuffed our gear into our packs. We had a story to tell back in camp that evening, that was for sure, and a stronger bond between us formed through our shared experience.

Chris Lenox was a difficult guy to be around at times. Like I said, he could go off on a moment's notice, scattering others in his wake. But, he had a kind heart and could be extremely loyal to his closest friends. Those who knew him best knew that he was a victim of his inner demons. I always held out hope that Chris could one day free himself from his psychological shackles, both for his own happiness and for the happiness of those around him. In the last year or so of his life, as those demons threatened to consume him, Chris got some needed help and began to dramatically turn his life around. Gone were his trademark outbursts. Chris even apologized to people whom he had previously offended. I had so much hope for him.

On September 3, 2009, just five short months after completing the FA of Fistfighter with Eric Forney, this world was robbed of an amazing, vibrant energy force when Chris Lenox wrapped his new motorcycle around a signpost on a Tulsa interstate. The world was robbed of the chance to see what kind of positive changes Chris was going to make with his life. I never got to see this new Chris. I was living in Colorado at the time and only heard through Eric Forney, a mutual close friend of ours, of Chris's low point and then of the dramatic changes he started making in his life. He was happier, more optimistic, no longer angry. I regret that I never got to see this Chris Lenox. I regret that none of us will get to see Chris Lenox again. Most of all, I just miss my friend. Hardly a day goes by that I don't think of him and of what could and should have been. I write this in the hope that Chris will never be forgotten. I know I will never forget. I miss my friend. 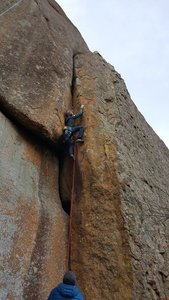 always striving for the onsight