The adjacent private landowners have been having issues with climbers crossing their property. Please approach from the old campground and follow the existing trail to avoid crossing any private property. Do not hike straight up to the cliff, even if you have to park on the road. Access Fund worked with local climbers to order and install signs along the private property boundaries. Please respect these signs and our neighbors.

Midlife Crisis is the central and most obvious ice column on the high, black shield of rock known as the Lifecycle Wall (named by Joe Szot; the other routes on this wall are "Death Left", Premature Birth", and "Afterbirth"). This wall sits at the top of the cliff above the main pitch of Son of Slime, up and left from the top of the Firing Line corner.

The main ice column, as originally climbed, forms in a shallow, right-facing corner that extends from a 40'-tall right-rising dike to the top of the cliff. On early ascents, this column was approached by rappel from the top. Because of the shallow corner, and despite appearances, the ice column is more resilient to sun damage than the other routes on the Lifecycle Wall.

Midlife Crisis was a ground-up project for many years, as everyone was waiting for the ice to touch down. After some years, two ground-up lines have been worked out:

Ground up option 1: Climb Discord (WI4, often delaminated) to gain the right-rising dike. Belay here (bolts), then follow the dike rightwards (following the line of John Turner's historic route, The Garter) for a long pitch (M6/M7) to belay at the base of the column. Standard rock rack to 2", double up on tiny cams, double ropes help.

Ground up option 2: In rare conditions (to my knowledge, these have only happened once since the FA), the ice touches down near the start of Varsity. Climb the iced-up slab to where the wall steepens, then follow ice straight up (following the route Son of Slime) to the base of the upper column. 200'

The upper column is a straight-forward ice column, often chandeliery.

Above and right of the Discord amphitheater.

Follow the trail from the parking lot to the cliff, which arrives at Discord. Either start here (option 1), or walk right 100' to the ice (option 2), or walk left to the Waterfall, ascend the chimney, and walk right along the top of the cliff to the rappel-in. 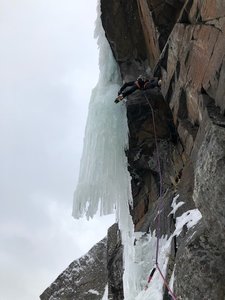 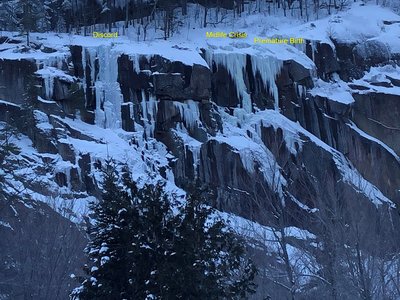 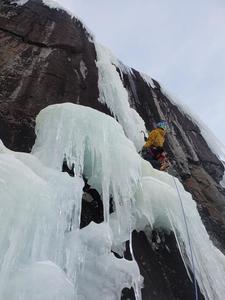 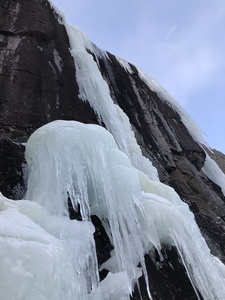 The pillar shown from the left after rapping in… 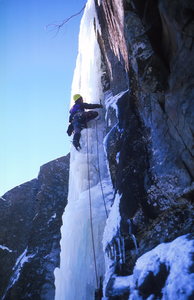