Routes in The Maiden

This route ascends one of the most dramatic features in the Flatirons. It's wildly exposed and not for the faint of heart. Climb the first 30' of the West Overhang, then go right across the vertical face past two bolts. Continue by climbing around the arete and up the steep overhang. The crux is probably the last 35', though it's pretty sustained the whole way. The rock is good quality the whole way, and the movement is very fun.

The first part of the route requires a bit of gear, but all the hard parts are bolted. Before traversing to the first bolt, it can be reassuring to clip a fixed pin on the West Overhang (though this should be back cleaned before going on). Long runners are a must on all the first pieces of gear and the first bolt. The next two bolts can have regular draws. It's also good to use a long draw on the first bolt around the corner (4th bolt on the route). Rope drag can be heavy near the top but is definitely manageable.

Getting down from the route can be a bit tricky. Be sure to read the beta below.

The direct bolted line that links into this route is still a project. All the moves have gone free, and it is probably in the 14+ range. It's an open project and will be a mega-classic when sent.

The route begins from the Crow's Nest under the West Overhang. You can belay from a bolted ledge down low, but it is more comfortable to build a natural anchor up higher on the better ledge (requires blue TCU and #0.75 Camalot).

There are several options listed below. In general, be careful to make sure you can reach the ledge. Also, be careful to reduce rope drag so you can pull your rope.

Option 1 [best]: (assumes someone will follow the route)
After clipping the anchors, trolley back down to the second bolt on the route. Clip a long runner into this bolt, and then clip your rope into that and lower to the slab. You must clip this if you don't want to be dangling in no-man's land. The follower then climbs on the regular end of the rope cleaning all of the gear. Be sure to leave the belayer's side still clipped in though. When at the top, lower down with a draw on the belayer side of the rope that runs through the draw on the second bolt. When you reach the second bolt, clip your rope into a leaver biner, and unclip the belayer's side of the rope from the draw. Lower the rest of the way to the slab, and pull the rope.

Option 2:
The leader can clean all of the gear while lowering. A leaver biner is probably required on the first bolt if doing this. This method is fairly unpleasant.

Option 3:
The leader cleans the upper part of the route while coming down and clips into a leaver biner on the second bolt. The lower section of the route is then cleaned on TR by either party. This way you don't have to climb the upper section twice, and you avoid the pain of cleaning the start of the route.

Option 4:
If so inclined, the leader can belay from the bolts at the top, or can continue on easy terrain to the summit and build a natural belay. The second can then be belayed up, and the West Overhang rap can be used to get down.

The majority of the route is bolted, but the start requires some gear (a few small to mid-sized cams). This is the 5.9+ section of the West Overhang. There is a two bolt anchor at the top. A 70m rope is required. 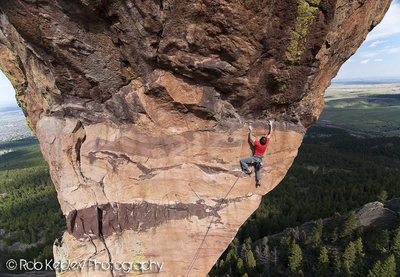 Ian Cavanaugh moving into the first crux on the… 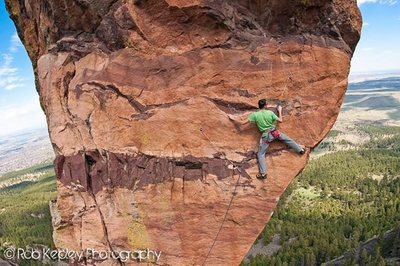 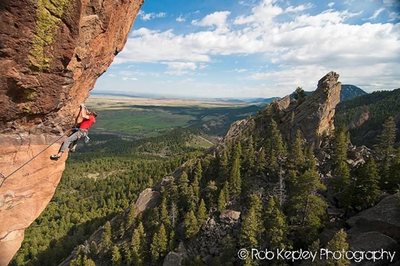 Ian Cavanaugh rounding the corner into to reall… 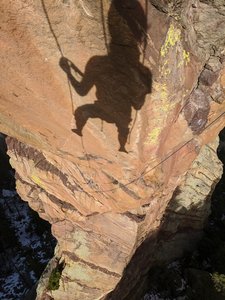 Looking down on the exposure of Maiden Voyage. 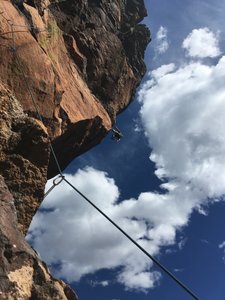