Where wast thou when I laid the foundations of the earth? (5.11)

To the right of The Dun Deal, climb the up the face right of a large right-facing corner to a roof. Stem out and go around the roof on the left, and then go up and right diagonally to a roof. Turn the roof and then follow right facing corners right of The Movie Star to a small stance. Climb up and right up an underling to reach for a bucket, and then up 10' to a hard move to then diagonal up and right to a bucket in the roof above. Turn the roof and move up and then diagonal up and left in the middle of the face to a white rock on the ledge. Easy climbing to the top.

The route appears impossible to protect on lead.

On left facing corners ten feet before the amphitheater and spring with a rhododendron bush under the overhangs. Climb up through blocks over the same overhang that comes all the way across from Promise Of Things To Come, and then up and right along good holds to smaller roofs. Traverse back left and over the roof. Climb up a ways and then traverse right and up again under another roof right of the left facing corner of The Good, The Bad and The Ugly. Climb over the roof and climb up on two hand sized right facing corners to face climb up to a tree. Traverse left over The Good, The Bad and The Ugly and climb straight up. Watch up for a block sitting on a ledge before the top of the cliff.

The Qibla Walls Intersected At Petra (5.10+)

Below a ramp that is over a break in the overhang 20' above, climb over the overhang and up into the ramp. (The block system into the ramp is untrustworthy.) At the top of the ramp angle left climbing over the beginning of the ramp and the start of the climb. Climb directly up into the beginning and then right side of the the giant ramp system above to the top. Be aware of loose rock around the top and in the ramp, and just below the tree etc.

Location: Under a smaller ramp to the left of the bigger ramp of Promise of Things to Come.

Left of Promise of Things to Come, at a "V" in the roof 21' off the ledge. Angle up and left into the "v" and then straight up to join Promise after the crux by means of a 8' ramp that angles up and right to join the main ramp.

To set up the TR, use a rope attached to a tree at the top of the cliff that has split a giant rock in two.

Between The Movie Star and Remembrance of Things Past, climb over the roof by means of a lose block under the roof, layback on the loose block and angle up and right to an upside-down flake with a flat top. Atop the upside-down flake, go up and left just a little to horizontal crack. Traverse right and then go straight up to a nice ledge. From the ledge climb straight up 20' and then angle up and left to large white block on Remembrance of Things Past. Mount the block and go over the overhang. Once over the overhang, traverse right just over the lip, and then go straight up to ledge. Climb over the last roof just right of blocks through pockets to boulders at the top.

Go straight up right of the bronze colored rock and over the overhang above 30 off the grand traverse ledge, turning the overhang at its most narrow point (when you turn this overhang you move right and then after back left a couple of feet). Go up about 10 feet crossing the Wire Wizard ramp and climb over the middle of a bigger second overhang between Past Recaptured and Wire Wizard, just right of a white right facing corner. Climb the face above up to a third overhang with a hair line crack in it around 8' left of Under The Wire and just right of the Future Recaptured variation of Past Recaptured. Climb over the hang and over the hairline crack and up the face to a ledge just below a budge with a long heavy diving board flake under it. Climb over the giant flake and bulge between two cracks to finish on Past Recaptured.

Note: It is important not to have the rope any further left of the finish corner then 10' because there is a long hanging flake in the middle of the climb at the last overhang before the ledge.  The flake will stay there forever if nothing interferes with it. 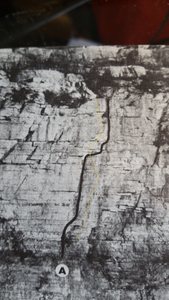 After Three Days: Climb up and left into V and…

NRON -- The climb does a lot of zigzagging on t…

Quibla Walls -- Remove the rocks at the top of…

Foundations of the Earth -- line marked by the…

Bronze Serpent: it's hard to tell from the…