Shortoff Mountain South: All routes between and including C.O and Paradigm Shift are closed.

Shortoff Mountain North: All climbing routes, cliff rim, and campsites within the red band marked on the map are closed to entry. No foot traffic or camping above or below the cliff in this section. Contact the USFS for more details: 828 652 2144.

Bynum Bluff: All routes are closed.

The Linville Crusher (aka Linville Link Up) is typically described as climbing 6 different routes on 6 distinct formations on the east side of Linville Gorge in a day, hiking/jogging between climbs. The majority of climbers do it north to south, as it's a net elevation loss in that direction. Most folks stash a car at Shortoff and then park at Sitting Bear to start, though a few teams have started at Gingercake Mountain.

The formations and their most commonly done routes are:

In the spring and summer when peregrines are nesting, Bumblebee Buttress is closed, so many folks opt to climb either the Mummy or Daddy, and then the Prow (5.4). That's sorta cheating as it makes for a MUCH easier/shorter day, and Apricot Jam (5.10) doesn't close. But whatever: have fun doing it however you like.

I'd also argue that caches are cheating, but if one were inclined to cache some gear or food somewhere, the most logical place would be the Table Rock parking lot.

There may be water in the Amphitheater and then again in the Shortoff descent gully.

Lots of folks do this to see how fast they can do it. As the crux of the Crusher is hiking, anyone reporting a time for the Crusher should report car to car times and not, say, their base-of-Sitting-Bear-to-topping-out-Shortoff time. You should also report whether caches were used, any porter support from other folks, whether you did it with one car or two, and whether you did the easy version that includes The Prow.

Park at either Sitting Bear or Wolf Pit Road. The best map for Linville Gorge is: lgmaps.org/?page_id=15

Varied, depending on how you plan to do it. Nuts, mid-sized cams up to a #2 or #3 Camalot. Water. 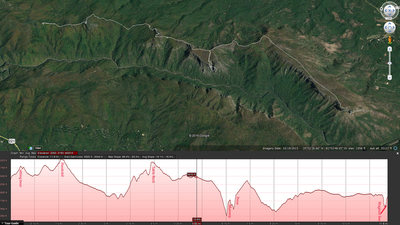 the variation we did, cheating with the prow an… 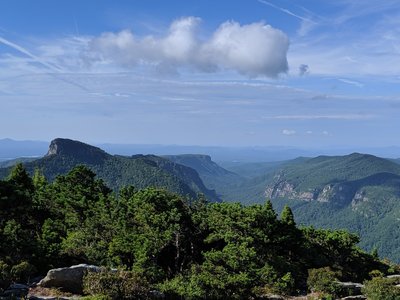 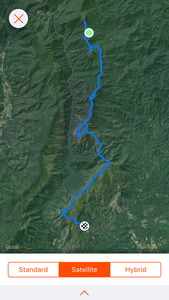 South to North - With Bumblebee Buttress