The West Bank / Wild West / Secret Crag has been problematic for years due to access concerns. There have been negative encounters with gun-toting landowners who have alleged that the entire mountain is on private property. Typical approaches involve brief crossing of railroad property which appears to be prohibited.

Exact demarcation of property boundaries are not always clear. When in doubt, be discrete or polite.

Do not park your vehicle near the railroad tracks near Plainview. It is a well-known irritant to Plainview residents.

Access Issue: Closed for raptor nesting from February 1 through Aug. 12? - each year Details

Update from the Flatirons Climbing Council: due to late nesting of peregrine falcons this year (2021), this area is projected to be closed until ~Aug. 12, 2021

This route was given 10a in the Levin Book, but I and a partner both thought it was quite substantially harder, and it is is harder in such a way and place, and at a runout, so as to be a serious problem on lead. Or perhaps it was just the weather and we were having a bad day.

The climbing is good over all, however, and the route can easily be top-roped from P1 of The Red Dihedral, with a pin to the right of those for a directional.

I spent quite some time trying to convince myself that the small hand holds and rounded pebbly foothold at the crux would hold me on my lead attempt prior to saying it wasn't worth it and backing off for a TR. I am pleased with my judgment on that call, as the crux there lead to an insecure move above, and then another.... from which I fell on TR. I saved myself a rough 30' fall, at least.

Despite the sandbagging, I thought the route was good. In terms of move difficulty and protection, I'd describe it as the 'evil cousin' of the nearby routes 'The Offset' and 'Skink's Lip.'

This route lies just a few meters left of P1 of The Red Dihedral. It starts in a shallow, right-facing corner and then goes onto a sloping ledge to the left above. From there, face climb up and right (perhaps dangerously) into a hanging crack through a bulge just left of the arete. Climb 80' in total to an anchor just to the left of the start of the climb, with a pin just before it as a directional.

A few bits of gear up 40' to a ledge that leans up and left. Protect in the crack above the ledge, then climb up and right 10-15' into a crack below a tree with strenuous protection available there once established in it (5.10 climbing as well). If you fall before that, you will be spun sideways on a long fall back into a corner below the ledge for a rib and head cracking landing....

Continue above in the 0.5-2" crack to the tree, then up the 5.5 climbing for 20+' above the tree, which is secure and not of much concern. Clip a pin, and step left to the anchors on P1 of The Red Dihedral. 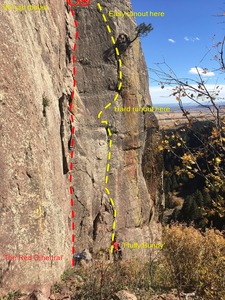