Variety of moves and rock situations.

Start up the steep gully. Step left to avoid an overhanging section, then back right. Next a gentle section which leads to the bottom of another gully which trends right.
. (Variation: Instead of starting in the gully, start the bottom of the face directly below the bottom of the upper gully).

Get established in the upper gully with a creative combination, then up the gully with positive holds at first, then finish out right on frictiony ramp.

Top-Rope upper variation: To make a line with less side-swing ... instead of finishing on friction ramp to right, exit the upper gully left into a dihedral with crack, climb this up two "steps", but then if the third final "step" (5.8+) is too difficult, just give up and get lowered off.

Descent: No rappel anchor as of 2016 -- so bring slings/cord and rings to construct your own. Or down-climb the route. Or traverse left to two-bolt rappel anchor above the route "di-crack3" (see instructions for Top-Roping access for that route).

Left-trending gully with a steep start that faces right. Which is a ways left from a less-steep right-trending gully. About sixty feet right from a set of three corner-cracks. 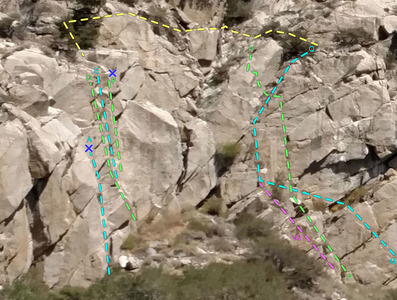 More About Chasing the Butterfly