Glissando [gli-sahn-doh] adjective:
-performed by sliding one's fingers rapidly over the keys of a piano, striking every key along the way.

This climb tags the summits of all 8 towers of "prominence" along the Keyboard of the Winds. Each summit clocks in over 13,000 feet. Many can be merely hiked to from the back side of the ridge, but to do the true link-up, each one should be climbed from the north.

Expect to hike about 16.5 miles and climb about 3,800 feet of slab and vertical rock. The climbing took about 13 hours total, add all the slogging, sleeping, and hiking, and it took about 27 hours car-to-car.

The following beta was our approach to this major objective. We began at Tower 8 and worked our way east along the ridge hiking back down to the base of the towers after each ascent. Each tower has multiple routes (some probably forgotten to time). I put the routes we used at the top of each list. Many of the routes we took were "new" and navigated without any beta on a whim to help make up time. So, if beta isn't thorough or clear, it's because I'm recalling thousands of feet of climbing off a blurry memory. Big shout out to Matt Eckelberg for helping us scout and hump gear up for this objective.

We took an obvious and easy left-leaning corner and ramp system on the towers northwest face. This turned out to be far and away the easiest pitch of the day. After sumitting, downclimb or hike around to your packs, and slog down to the base of the next tower.

From the base of the tower, an obvious, slabby chimney splits up the center face. Climb it for about 200 feet of easy terrain. After reaching a large ledge, traverse a bit right until underneath a large, right-leaning, right-facing dihedral (Brass in Pocket) or traverse almost 100 feet left until reaching the prow of the tower. Climb the prow to the summit over pretty consistent 5.7 face, chimney, and crack climbing. Tag the summit and hike back around to the notch between Pagoda and Tower 8, and find your way to the base of the next tower.

From the base of Mrs. Stubbs, locate the ledge system just left of her prow. Jaunt up the ledges until the climbing begins to thin. Many easy options follow up this face through ledges, flakes, and even a hidden, low angle, splitter finger crack. Consistent 5.8 climbing drives straight up and slightly left to the towers summit. There is supposed to be a rap station on this tower, but we couldn't find it, so we downclimbed a 5.7ish corner for 40 feet on the tower's back side. Hike down the gully between Mr. and Mrs. Stubbs.

This is the obvious line that cuts straight up the center of the tower (crux) before traversing right and cruising up a large dihedral on the tower's right side. This tower was also supposed to have a rap station on top. Unfortunately there was no obvious downclimb, so we built a two nut rap anchor of our own (7/16). Rap and hike down the gully between Mr. and Mrs. Stubbs.

Tag the summit, rap, and hike down the gully between Mr. and Mrs. Stubbs.

We climbed a line that seemed to follow the exact same line as this route, but it felt much closer to 5.9 or 5.8, so we're not sure it was exactly the same. Anyway, at the base of the prow, look for a long, large, left-facing dihedral, and follow it until it peters out. From here, climb the path of least resistance straight up the prow until hitting a large ledge with a mini-pinnacle. Traverse out right, climb up a large corner, and cruise to the top. This route may be the most consistent and enjoyable climbing of all the routes we climbed on the Keyboards. Top out, and hike down the gully between Mr. and Mrs. Stubbs.

Hike down the gully between Towers 1 and 2.

It is much easier than it looks from Tower 2 and much funner, too! Hike down the Trough back toward Green Lake.

Approach: hike the Glacier Gorge Trail up to Green Lake. The Keyboards are the obvious teeth rising from the ridge between Long's and Pagoda. Then, hike up the brutally steep and loose North Gully aiming for the notch between Tower 8 and Pagoda Mt. 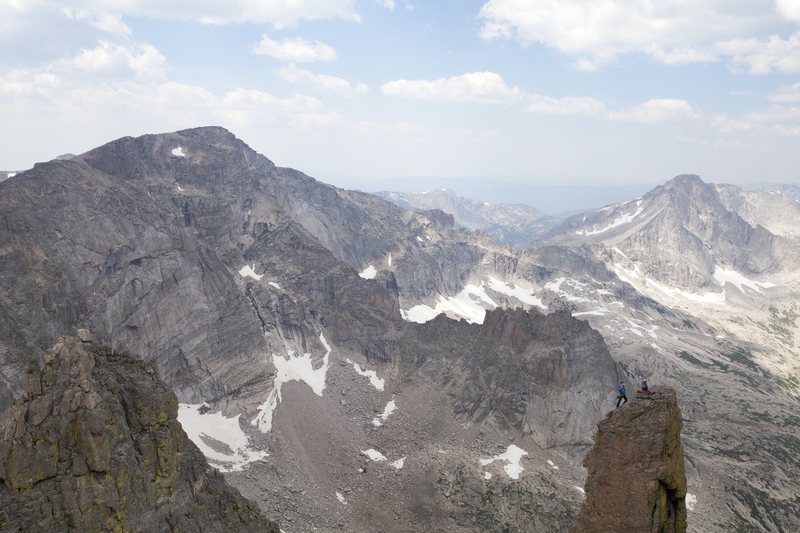 [Hide Photo] The summit of Mrs. Stubbs and Wind Chill as seen from the ridge line. Spearhead and Chiefshead dominate the background. Photo credit: Matthew Eckelberg. 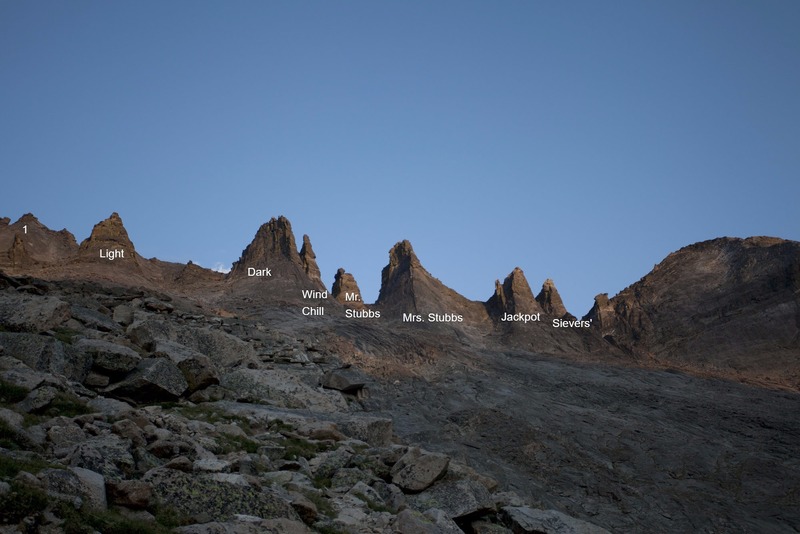 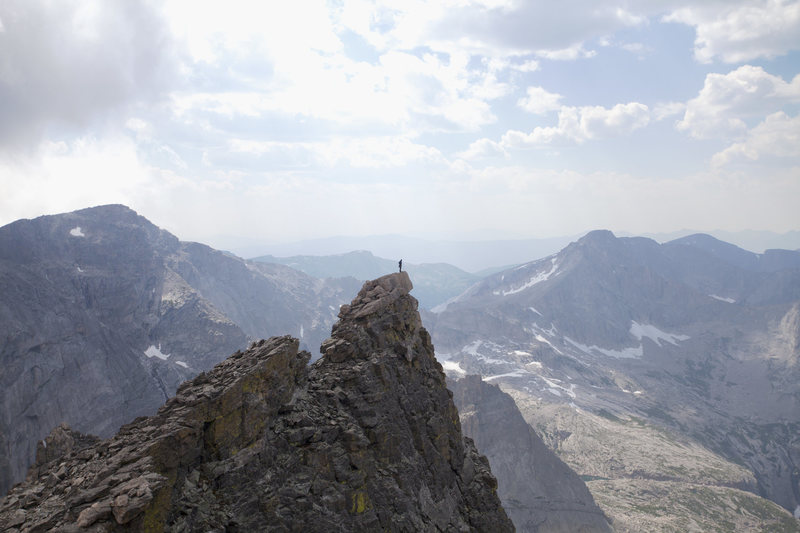 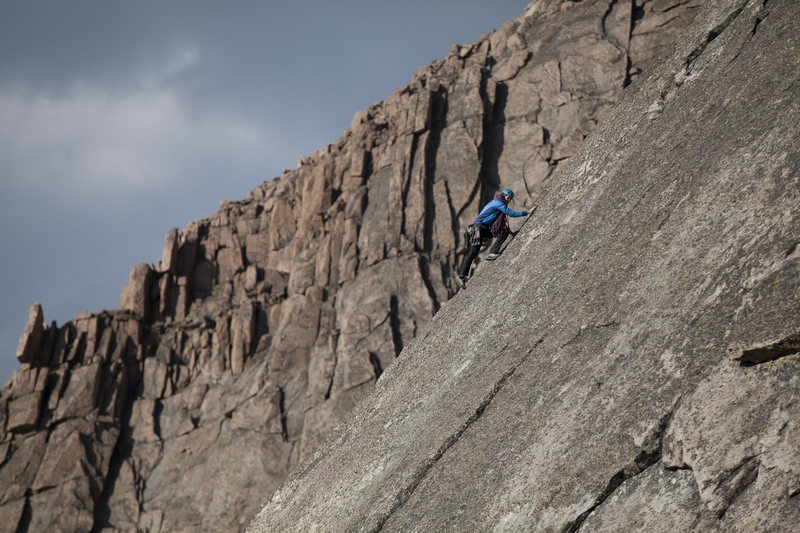 [Hide Photo] Battling up Tower 1 after a long day. Dragging the rope up in case we ran into some spice. Seen from Tower 2. Photo credit: Matthew Eckelberg. 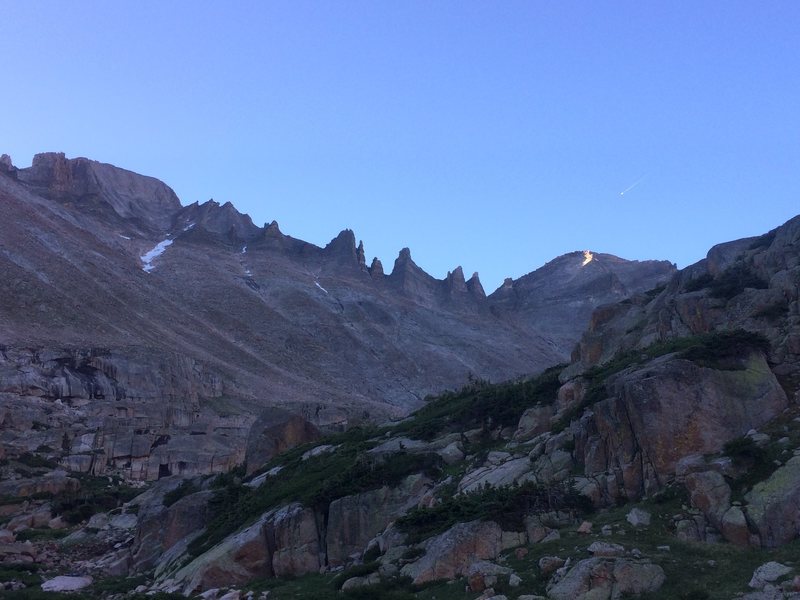 [Hide Photo] The Keyboards from low on the Glacier Gorge Trail.