The Migot Spur is the central pillar on the north face of the Chardonnet leading directly to the summit. Ridge can be achieved either by west facing slopes (AD+) or directly by surmounting the north facing rock buttress at its base (D). If taking the west facing slopes, look for a left slanting chossy chimney right after the bergschrund.

Follow the snow arete to a rock band which can by bypassed by an ice gully or mixed ground. Stay right after the rock band to avoid the seracs overhanging the left side of the spur, and follow snow arete (45-50 degrees) to the summit.

The bergschrund crossing is threatened by rock fall, and snow conditions further dictate an early start. Descent would also be terrible in poor snow conditions. Ideally be on the first snow spur before dawn after a good refreeze.

The descent can be tricky (but not too bad). From the summit follow the west ridge by moderate snow (40 degrees?) and mixed ground. Avoid left slanting snow gullies which will lead to Argentiere Glacier. Stay right to find a series of rappel stations which lead to the shoulder of the Chardonnet.

The first rappel can be downclimbed easily, while the second could also be downclimbed but would be more difficult. An alternative descent involving a single FULL LENGTH rappel also exists on skiers left of the rappels just mentioned and can also be used to bypass this rock band. It's mentioned here as a warning for those climbing with single ropes, since this author doesn't have any firsthand knowledge of this variation for a more detailed description. After overcoming the rock barrier you'll quickly find yourself on a shoulder above a bergschrund.

A 200' rappel from the farside of the shoulder (or downclimb) will get you back over the bergschrund on a portion of the glacier one ridgeline to the west of the start of the Migot. The glacier below this point can be a bit contorted, so inspect this area from a distance the day before to get a sense of the best way through the crevasses. When we did it, the branch on skier's right was the easiest to get through, as seen in the beta photo on this page.

Screws, light rock rack. 1-2 pickets if you want to protect the final snow slope. Most parties don't seem to bother protecting it though. Double ropes facilitate the final rappel over the bergschrund on descent. 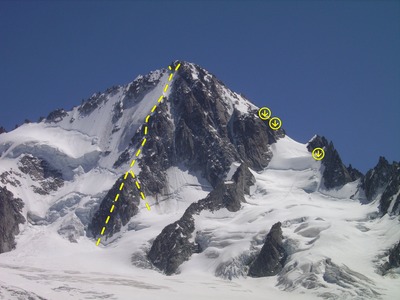