Climb from near Trail Crest roughly north to near the summit of Mt Whitney, mostly along the east edge of the slanted Whitney high plateau. This "edge" is also the top of a very steep often vertical wall hundreds of feet high, the most spectacular alpine rock wall in North America.

Many fun scrambling moves on interesting fractured granite at the 3rd class some 4th class difficulty level. Very sustained: 7000 feet (2100 meters) of climbing is a real lot.
"Fractured" means that sometimes a chunk of rock might move or fall (or break). So always test each rock and hold before committing a move (and test again if you've chosen to try a move with serious exposure).

Commitment: Not much "commitment" because the well-designed John Muir Trail for hikers is not far away.

Exposure of two kinds: There are many sub-peaks (with or without names) on the route with narrow summits with exposure on two or three sides. And
all along the route there is "one-sided" exposure, because it follows along the edge. Each individual climber can choose where and how often to look down over the edge -- and when and where to make climbing moves right at the edge (or sometimes over the edge).

Why this route?: For an experienced outdoor climber who wants to reach the highest summit of the main 48 states, by a route that includes some fun interesting climbing -- but not carry the weight of protection+rope, and not need to coordinate with a partner for one of the alpine rock routes on Mt Whitney.
. (Arguably the Happy Cowboy has lots more fun climbing and lots less scree than the Mountaineer's Route).
. (or could do both, especially those Mountaineers climbers who understandably also want to also tick Mt Muir).

Three short sections with their sub-peaks are usually skipped (taken more west away from the "edge") because their difficulty is much greater than 4th class:
a) the first 100 yards north from Trail Crest at the start.
b) down-climbing the N+NW side of Mt Muir (intimidating and tricky to find the route on down-climb, and with two 5.6 moves).
c) a short ways north after Mt Muir, for about 200 yards at around (lat long N36.5673 W118.2924).

Crux of this route as normally done is ...
Getting the required permit to travel in the section of the Mt Whitney Zone which includes the Mt W Trail.

Directions: From Trail Crest, walk north down the Mount Whitney Trail about a hundred yards - (if you reach the junction with the John Muir Trail you've gone too far). Scramble up east steeply on (loose) scree and talus to reach the edge. Optionally make a side-trip to the sub-peak to the south. Then turn north and follow the crest of the ridge (the "edge").

Mt Muir (lat long N36.56469 W118.29144) (alt 14218ft / 4270m) is a much-desired peak on this route: Going up the south ridge is too difficult for this traverse, so instead start a ways NW from that on the right side of its west face and follow these instructions: the Normal west side route from the hiking trail.
Descend the same way -- because down-climbing the north ridge is intimidating and tricky routefinding, with a couple of moves too difficult for this traverse.
. (Variation - much more difficult + intimidating: Down-climb the W + N ridge route).
. (Variation: After down-climbing the Normal west side route, have fun climbing up the remarkable sculpted granite of the bottom section of the W + N ridge route).

Descent: Take the John Muir Trail south from the Mt Whitney summit to meet the Mount Whitney Trail. Next a little south on that to reach the Trail Crest col. Then mainly East a long long ways down to Whitney Portal trailhead parking.

Statistics:
Approach hike from Whitney Portal up to Trail Crest is something like +5500 vertical feet of uphill over 8.5 miles (+1670m over 13.5km)
Typical time for a "normal" hiker might be 10 hours. An athletic climber with good acclimatization to altitude might hope to get up to Trail Crest in 5-6 hours. For those doing it as an overnight, it is something like +3700 vertical feet over 6.3 miles distance (+1125m over 10.1km) to Trail Camp, a popular camping spot (with the highest reliable source of water).

climbing route -- For doing the Happy Cowboy on "the edge" between Trail Crest and the summit of Mt Whitney, it is difficult to estimate vertical and distance, because it depends on which and how many high points visited along the way, and how aggressive the "shortcutting" around skipped points. The John Muir Trail is said by some authorities to take 2.5 miles (4.0 km) distance for this. The difference in altitudes is about +825ft (+250m). Of course the "edge traverse" has much more total uphill than that. And it would be surprising if the "edge traverse" had less distance than the main trail.
. (Anyway every climber's speed in scrambling over 4th and 3rd class terrain will be different, so even if we knew vertical and distance, it's not simple to estimate time. And since escape is easy at several points along the way, estimating time is not so critical).

Normally reached by hiking up the Mount Whitney Trail from the trailhead parking at Whitney Portal (which is roughly W from the town of Lone Pine).

alternate Access: Climb to the summit of Mt Whitney by the Mountaineer's Route. Then hike down south on the John Muir Trail to one of the several points where the Trail comes very close to the "edge", and do some portion of the Happy Cowboy on the way back up to Whitney summit.

warning: Despite any impression you might get from reading the Mt Whitney area description page on MountainProject, the Mount Whitney Trail has nothing to do with the North Fork of Lone Pine Creek.
Rather ...
The Mount Whitney Trail runs in the South Fork of Lone Pine Creek (which requires a different USFS permit obtained by a different process and rules than for the North Fork).

Abundant rock constrictions and horns to place slings for protection.
Or a skillful leader can protect by running the rope cleverly around horns and rocks.

But since each individual climber can control the exposure and to some extent the difficulty by small adjustments in route selection, mostly there is little need or use for protection. 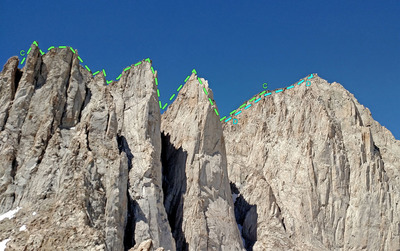 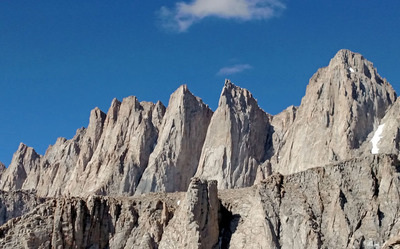 E side of Happy Cowboy ridge S of Mt Whitney .…