There's a gate at the start one must pass through. Hikers are free but they charge 20 soles per mule each way (2016).

Popular as an acclimatization hike; you might see one or two parties up there. Difficulty varies from F to PD, with the latter more likely nowadays.

Cross the lower glacier coming off San Juan and aim for a weakness in the rock col ahead. Scramble (class 2+) over the rib and onto the other side with views of Huantsan. Turn left and follow the snow until one can climb up and onto Maparaju's west glacier above and around the rock points at the col.

Perhaps up to 40 deg snow/ice. Cross the glacier and head left towards Cayesh until you can bypass the headwall on the left side with light scrambling. A bit more glacier up and follow to the right side of the summit.

The summit ridge tends to be the crux and expect some exposed but easy AI2ish moves, doable with ax, until the rocky summit (which is also surprisingly not the high point). While most claim this as the summit, 50 yards farther is a more difficult rock point which is likely the true summit; looks like some rock pro, tools, and screws would be warranted.

Most can descend without a rappel. Perhaps one or two 35-40 deg sections and crevasses to negotiate.

At the head of the right fork when heading up the Quilcayhuanca Valley. A couple idea camp spots below Cayesh. Follow a grassy, cairned ridge/slope up right until reaching a cliff near the Maparaju drainage. A cairned trail, somewhat exposed and a move or two of class 3, cuts right and then back left to get above the cliff. This is followed by more cairned trail on scree and moraine until reaching the glacier at the San Juan/Maparaju saddle.

A picket each and perhaps a screw. 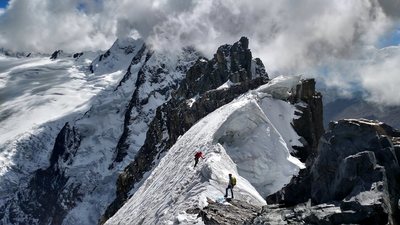 Scoping out the route to the true summit (photo… 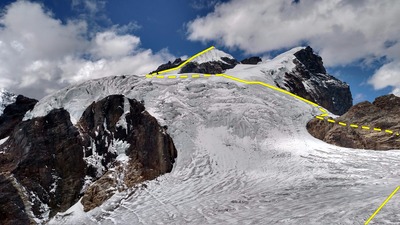 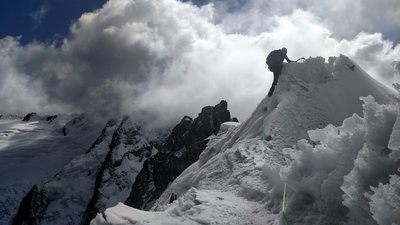 Crux below the summit